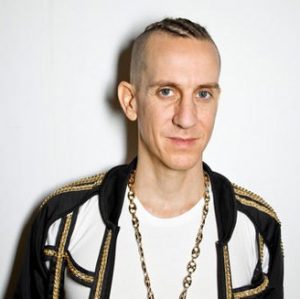 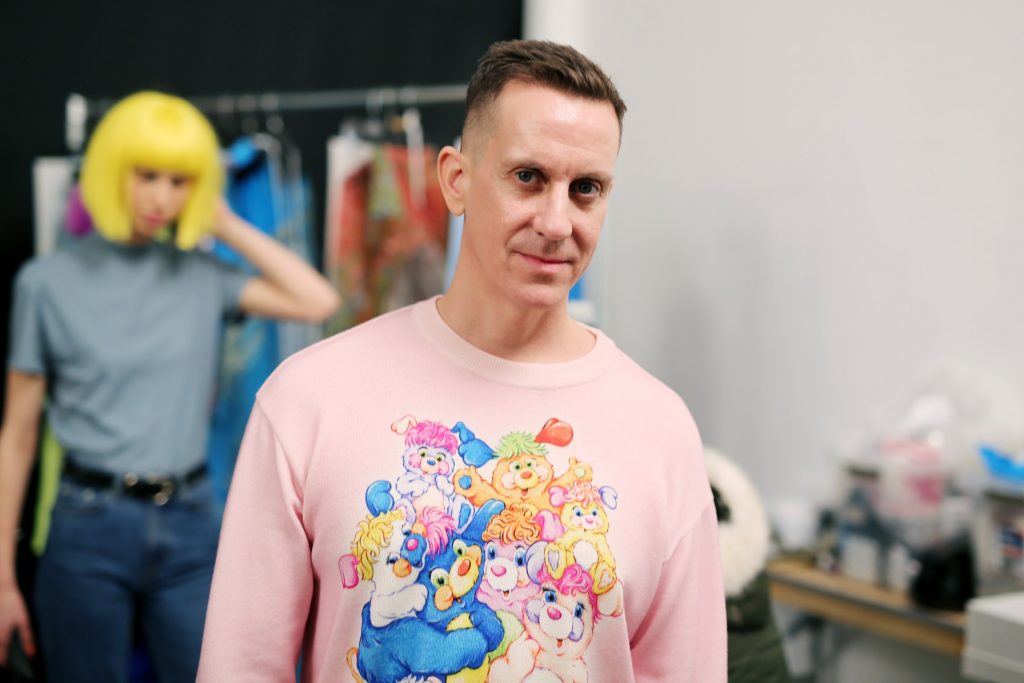 Jeremy Scott  is the creative director of the fashion house Moschino and the sole owner of his namesake label. Since launching his brand in Paris in 1997, Scott has built a reputation as “pop culture’s most irreverent designer”,and “fashion’s last rebel”.

Inspired by American consumer culture, Scott has reinterpreted the logos of brands such as Barbie, McDonalds, Coca Cola and the Loony Tunes in his Moschino collections, largely boosting sales by double digit growth upon his appointment. He has struck ongoing collaborations with Longchamp, Swatch, and Adidas dating back to 2002. His 2008 Adidas winged high-top sneaker is a recognised hallmark of his collaborations, inspiring a fragrance modelled after the shoe.seen the Insta-famous designer amassed a cult following.

Scott was born in Kansas City in 1975 and raised on a livestock farm in Missouri. Determined to make it in fashion – and to live in Paris – he took French lessons and night courses in Japanese from 14-years-old.In high school, he drew fashion in his notebooks and was bullied because of his dressing style. He discovered runway fashion in Details, looking up to Jean Paul Gaultier, Martin Margiela, Thierry Mugler, and Franco Moschino as role models. He graduated from the Pratt School of Design in New York in 1996.

Scott did an internship in the New York offices of Aeffe, the company that owns Moschino. After graduating in 1996, Scott moved to Paris. While looking for a job in the fashion industry, he was forced to scrounge meals and sleep in the metro. When he ran into a PR for Jean Paul Gaultier who liked his hair (Scott cut his own hair since he was five), he got a job promoting parties at a nightclub. Not having any luck with fashion jobs, he decided to create his own brand.

An important part of Scott’s work has been outfitting show business celebrities such as Beyoncé, Rihanna, Lady Gaga, and Nicki Minaj. Some of them, like Katy Perry, Miley Cyrus, and CL, have collaborated with him so frequently that they have earned the nickname “the Jezza posse”.

In January 2015, Scott created the costumes for the Super Bowl XLIX Half Time show performance of pop star Katy Perry.Rihanna wore Jeremy Scott denim bra top and circle skirt in the “We Found Love” music video.The retro-futuristic stewardess frock worn by Britney Spears in her “Toxic” video was made by Scott.He designed Lady Gaga’s outfit in “Paparazzi”.For the 2015 Metropolitan Museum of Art’s Anna Wintour Costume Center gala, Scott dressed Perry, as well as Madonna, whom he considers the original music/fashion icon.At the 2016 Met Gala, his outfits were worn by Nicki Minaj and Demi Lovato.

Scott dressed The Muppets’ Miss Piggy for a photoshoot with Kermit the Frog as Andy Warhol.As the creative director for MTV Video Music Awards 2015, he redesigned the Moonman statuette.Scott has been called fashion’s equivalent of Andy Warhol.The Vulgar: Fashion Redefined, a British exhibition themed around different concepts of vulgarity, included Scott’s sweet wrapper-themed dresses alongside Warhol’s Souper Dress in the pop art-centric “Too Popular” section.

Since he began designing, members of his family have attended almost every show.Jeremy’s parents are Jim, an engineer, and Sandy, a teacher. Jeremy has two older siblings, Barbara, a lawyer, and James.

Scott owns two houses designed by John Lautner: the Foster-Carling House (1947) in the Hollywood Hills and the Elrod House (1969) in Palm Springs.

He presented his first collection for his eponymous label at Paris Fashion Week in 1997. The show, which was held in a bar near Bastille, was themed around car crashes and saw models wearing shoe heels bandaged to their feet. Scott swiftly became known as one of the ‘enfant terribles’ of the Parisian nightlife scene.The collection was later exhibited in the influential Parisian shop Colette, which has carried Jeremy Scott ever since. Decades later, his label is also backed by Aeffe.

His third collection, all in white, was a critical hit. It won awards and attracted Mario Testino, the editors of French Vogue, and the stylist Isabella Blow, who adopted Scott as a protégé.The white show was the first runway appearance of the soon-to-be-supermodel Devon Aoki, who was only 13 at the time, who would collaborate again on Scott’s Autumn/Winter 2016 campaign.Björk was an early adopter, wearing a dress from the white show for her homogenic world tour. Scott would provide costumes on several of her tours.

In the same year, Scott made a show about 1980s decadence (sable, shoulder pads, big hair, gold lamé) as maybe the first designer to revive the eighties. The models’ unbalanced heels were designed by Christian Louboutin. Scott himself considers “the gold show” as the hardest moment of his career.

HIs 1998 spring collection titled “Duty Free Glamour” featured flight-attendant inspired looks and khaki jackets plastered with logos. Karl Lagerfeld said that Scott was the only person working in fashion who could take over Chanel after he left.In 2001 Scott left Paris for Los Angeles. It was seen as a surprising move, since Los Angeles was not yet a fashion capital at the time.

Scott had cemented his reputation as a cult label with fervid fans, particularly in Asia but he was still on the fringe of the fashion establishment, as he was considered neither “serious” nor “commercial”.His  affiliation with celebrities saw Scott take his eponymous label from Paris to LA in 2001. Since then, Scott has effectively leveraged his relationships with pop icons and Instagram stars to ensure both Moschino and his eponymous label have high visibility and rising sales.

Scott returned to the United States in 2002 and began a partnership with Adidas. His best-known Adidas collaboration came in 2008, when Adidas Originals launched Scott’s collection of footwear and apparel that included JS Wings (winged high-tops) and JS Bears (furry sneakers with teddy bear heads).He debuted his first fragrance for Adidas on February 1, 2015, in a glass replica of his Adidas winged sneakers.

In 2005, he launched a popular line of eyewear with Linda Farrow and, in 2006, began a relationship with Longchamp. In 2010 and 2011, he created two series of watches for Swatch.

He has also been featured in film projects such as the 2015 He is also the subject of a 2015 documentary by Vlad Yudin, entitled “Jeremy Scott: The People’s Designer,” which features cameos from many of his pop star friends. Scott was the featured Guest Designer at the 88th Pitti Uomo, Florence’s premier bi-annual menswear tradeshow. His Adidas sneakers were included in the Brooklyn Museum’s “The Rise of Sneaker Culture” exhibit.

In October 2013 Scott became Moschino’s creative director. After turning down several other offers, he chose the Italian label because it had a similarly irreverent approach, its founder Franco Moschino seeing fashion as a form of protest.Scott has been credited with reviving the Moschino brand, boosting its sales and turning it into a fan favorite.

Scott wrote and art directed a TV commercial for the Moschino Barbie doll, as well as a  Sims X Moschino capsule collection and fashion film for the 2019 festival season. Scott counts this move towards an upcoming upgrade of Moschino’s digital presence, beginning with a partnership with Sims to create in-game apparel. He also headed Moschino’s cross into makeup, launching two collaborative collections.In fact, his fashion is often humorous: a 2016 show included a handbag that looked like a box of Marlboro Reds and bore the warning Fashion Kills.

1998: He won the Venus de la Mode award for best new designer for his second collection.

1999: He was nominated for Best Young Designer of 1999 by the Council of Fashion Designers of  America. He won the Venus de la Mode award for best new designer for his third collection.

2015: He was awarded the Womenswear Designer of the Year award at the Annual Fashion Los Angeles Awards.

2017: He has agreed to hold a retrospective of his fashions at the Dallas Contemporary museum in, on the 20th anniversary of his debut.