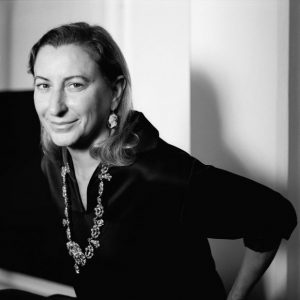 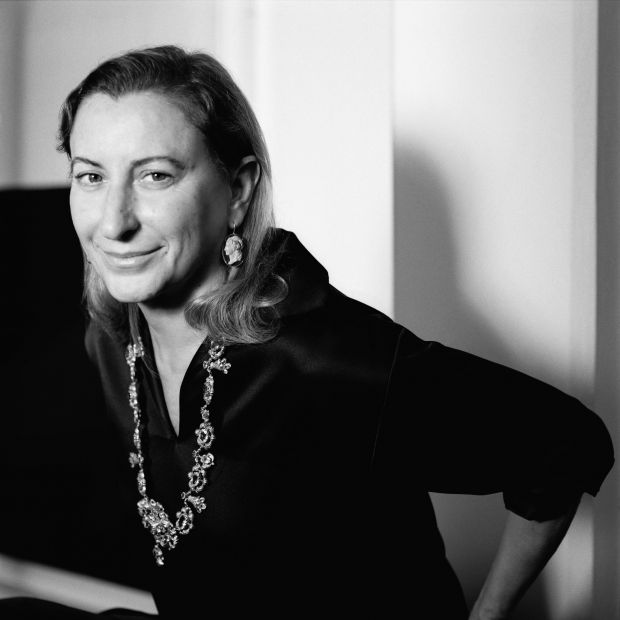 The youngest granddaughter of Mario Prada, Miuccia Prada transformed his leather goods business into a multi- million dollar conglomerate, Prada. Today she is head designer and co-chief executive [with husband Patrizio Bertelli] of Prada and founder of its subsidiary Miu Miu. In 2019 Forbes estimated her net worth at US$2.4 billion.

Born Maria Bianchi on 10 May 1949, she was the second of three children. Her father, Luigi Bianchi, headed a firm that manufactured putting-green mowers and her mother, Luisa, was heiress to luxury leather goods business Fratelli Prada. Re-christening herself Miuccia Prada after being adopted by an aunt, she completed PhD in political science from Milan University and studied to become a mime at Milan’s Piccolo Teatro. Once a member of Italian Communist Party, she joined the family business established by her grandfather Mario Prada in 1913. Succeeding her mother in 1978, she transformed the business and hired as primary supplier Patrizio Bertelli, a leather-goods manufacturer whom she had met the previous year at a trade fair.

With Bertelli as business manager, Prada expanded beyond luxury luggage, steamer trunks and handbags. In 1985, her anti-luxury accessories, the nylon handbag and backpack, instantly became it-bags. A footwear line was released in 1984. The following year, she unveiled the “classic Prada handbag”. Her eponymous ready-to-wear line debuted in 1989 and then she launched the less expensive ‘Miu Miu‘ label inspired by her own wardrobe. In 1993 she and Bertelli founded Prada Foundation, a nonprofit organisation that supports up-and-coming designers, including architects and artists. In the same year, she added menswear and in 1997 released a line of activewear, ‘Prada Sport’, later renamed ‘Red Line’.

Miuccia Prada challenges pre-established aesthetics, surrounded by artists and intellectuals. With her at the helm, classics are taken apart and re-examined in her continual search for something fresh, creative and avant-garde. Her progressive ideals are reflected in iconic designs including intricately embellished cardigans; Geisha dress; streetstyle corset; bralette worn over a shirt; silk turban; conceptual stiletto. Subsequently, she was awarded Council of Fashion Designers of America International Award and showed her collections in New York and London.

Miuccia Prada is now co-CEO of Prada which she has transformed it into a reported $11.4 billion enterprise, expanding into leather goods, footwear, fragrance and apparel. Prolific acquisitions include Helmut Lang Alaia and Jil Sander and a stake in fashion brands such as Fendi. However, there were rocky days ahead. Facing debt, Prada and Bertelli liquidated their acquisitions and 2011 witnessed Prada’s initial public offering in Hong Kong.

In the late Seventies, Miuccia Prada met Bertelli, Tuscan entrepreneur and owner of two companies that produced high-quality leather goods. They became business partners and this professional relationship eventually transformed into a personal one. The couple later married and had two sons.

1995: VH1 Fashion Award for Womenswear Designer of the Year

1996: VH1 Fashion Award for Womenswear Designer of the Year

1998: VH1 Fashion Award for Womenswear Designer of the Year

2005: Named one of Time Magazine’s 100 Most Influential People

2010: Named McKim Medal Laureate for her achievements in fashion and business

2013: International Designer of the Year at British Fashion Awards

2014: Listed as 75th most powerful woman in the world by Forbes