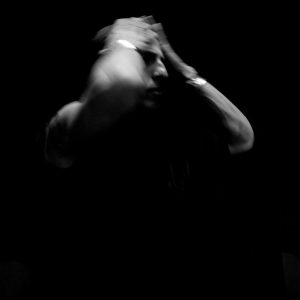 Working out is modern couture.

Rick Owens evolved his dark glamorous, post-apocalyptic take on gothic grunge into a fashion conglomerate. In addition to his main line, the fashion designer has a furniture line and a number of diffusion lines, mainly Drkshdw, Rickowenslilies and Hunrickowens.

American-born, Paris-based designer Rick Owens’ journey from knock-offs to launching a fierce independent label and evolving it to a globally-acclaimed brand is inspirational. Owens dropped out of Otis College of Art and Design to undertake a course in pattern making which led him to a position cutting patterns for knocked-off designerwear!! In 1990, he was hired as pattern-maker by fashion designer Michelle Lamy. Per Los Angeles Times, “Patti Davis, daughter of Ronald Reagan, was wearing Lamy, including a T-shirt with seams that show on the outside. In 1987 she grossed $6 million in retail sales.” What followed was right out of a fairytale. The two fell in love. Owens left his boyfriend, Lamy left her husband… and the two got married.

Rick Owens debuted his womenswear in 1994 and retailed it in LA-based avant garde boutique Charles Gallay, which also housed Versace, Mugler and Margiela. The goth-chic label became a hot-seller when he showcased at New York Fashion Week SS02, with his collection sponsored by Vogue after supermodel Kate Moss was featured wearing his leather jacket in French Vogue earlier that year. There was no looking back. In 2001, Rick Owens inked a distribution deal with Eo Bocci Associati and the designer’s production shifted to Italy. After a devastating mugging in LA, the couple moved to Paris in 2003. Owens was appointed artistic director at French fur company Revillon and remained with the brand for a few years before shifting focus on his own brand.

In 2004, Owens debuted his menswear, which became a rage due to his twist on classic silhouettes, particularly the gauzy bombers and sharp shouldered blazers. The first flagship opened in Paris followed by stores in London, Milan, Hong Kong, Tokyo, Seoul, New York, Miami and LA. What was commendable is that the brand expansion happened organically through increased demand, not external finance. In July 2005, Rick Owens diversified the brand with a line of furniture designed using raw plywood, resin, fibreglass, cashmere and marble. The following year, he launched a sneaker collection, Dustulator Dunk. Though it became a cult, it also made headlines due to a potential lawsuit with Nike.

The designer was honoured twice by CFDA — Perry Ellis Award for Emerging Talent 2002 and Lifetime Achievement Award 2017. Other notable awards include Cooper-Hewitt Design Award for Fashion Design and Fashion Group International’s Rule Breaker Award, both in 2007. Per ‘Business of Fashion’, “In 2010, Owenscorp revenue was around $40 million. In 2012, that number was closer to $70 million; in 2013 it exceeded $100 million… And, though he once flirted with the idea of selling to an unnamed conglomerate, Owens has grown his house without any outside help.”

In 2013, Owens collaborated with Adidas to design sneakers, creating new models, reimagining classics and incorporating new technology in footwear that was in sync with his runway collections. The collaboration came to a close in August 2017. Rick Owens expanded his core audience with diffusion lines based on streetwear, work wear and fur. His museum retrospective, “Subhuman Inhuman Superhuman”, opened at Triennale di Milano, where he described his work in the exhibit pamphlet: “‘I would lay a black glittering turd on the white landscape of conformity’. I wrote this shamelessly bombastic line over twenty years ago and it’s a very simplistic summary of what I initially set out to do. Over the years, this defiance softened into a more tender expression. If I could ever so slightly blur the rigid parameters of what is considered beautiful or aesthetically acceptable I will have fulfilled any potential I had to make a positive contribution in this world.”

Rick Owens continues to be heralded as a legend. Post-pandemic, his SS21 collection was well received. Per Vogue, “The fascination of an Owens show is that as dark and disturbing as his theme may be—as hellish as we all feel—he inevitably leaves you galvanised. ‘In the face of adversity,’ he said, music pounding in the background, ‘we have to pull ourselves up’.”

To stand at the forefront of the avant-garde through instantly recognisable silhouettes and a largely monochrome palette often painted with gothic overtones.