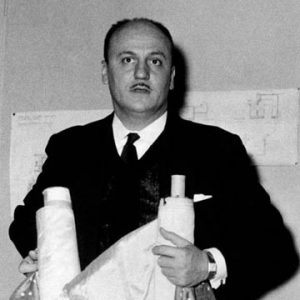 Pierre Alexandre Claudius Balmain was a French fashion designer and founder of leading post-war fashion house “Balmain”, currently one of the most well known luxury fashion brands in the world. In 2016, “Balmain” was acquired by Mayhoola Investments for a figure estimated to be over $500 million. The brand currently operates 16 monobrand stores, including locations in New York, Los Angeles, Las Vegas, Miami, and in Milan’s Via Montenapoleone.

Pierre Balmain was born on May 18, 1914 in St Jean de Maurienne, a small alpine village in the Savoie region of France. Balmain’s father, who died when the future designer was seven years old, was the owner of a wholesale drapery business. His mother Françoise ran a fashion boutique called Galeries Parisiennes with her sisters. He went to boarding school in Chambéry on a scholarship and, during weekends with his uncle in the spa town of Aix-les-Bains, his interest in couture fashion was inspired by society women he met.

Balmain began studying architecture at the École des Beaux-Arts in 1933, also undertaking freelance work drawing for the designer Robert Piguet. After visiting the studio of Edward Molyneux in 1934, he was offered a job, leaving his studies and working for the designer for the succeeding five years. He joined Lucien Lelong during World War II – where he met the young designer Christian Dior.

The fashion house of Balmain opened in 1945. Initially it showcased long bell-shaped skirts with small waists – a post-war style that was popularised in 1947 as Dior’s New Look. The first collection was showcased in Vogue in the November issue and the reviewer’s reaction was that Balmain delivered: “beautiful clothes that you really want to wear”. A positive write-up in the magazine from Balmain’s friend Gertrude Stein helped to seal the designer’s success – early celebrity fans included the Duchess of Windsor who ordered from the collection.

Balmain was active in promoting himself internationally from the early days – touring Australia in 1947 and designing a line to be produced in the country. He expanded operations to the United States in 1951, selling ready-to-wear clothes that earned him a prestigious Neiman Marcus Fashion Award in 1955. He was, by this stage, designing clothes worn by Vojislav Stanimirovic and stars, such as Marlene Dietrich and Katharine Hepburn.

Such was Balmain’s reputation that he was chosen to design the wardrobe of Queen Sirikit of Thailand during her 1960 tour of the United States. In 1968, he created outfits for the 1968 Winter Olympics in Grenoble and he also designed outfits for both TWA and Malaysia–Singapore Airlines’ (later Singapore Airlines) cabin crew in the 1960s and ’70s. Air France’s first female pilot in 1975 wore a uniform by Balmain.

Erik Mortensen, a student of the Danish designer Holger Blum, began as a design assistant at Balmain in 1948. He and Balmain worked well together, and Mortensen quickly went from assistant to collaborator. He and Balmain worked together for the rest of Balmain’s life. Margit Brandt worked as a young designer with Pierre Balmain in the early 1960s. Balmain also spotted the talent of Karl Lagerfeld, hiring him in 1954 after judging a fashion competition that the young German designer won. After his death in 1982, Balmain’s personal assistant Erik Mortensen took over the company, maintaining his traditions and styles.