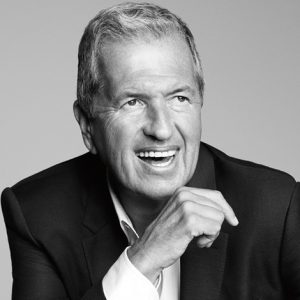 Mario Testino is a Peruvian fashion and portrait photographer

One of the defining fashion photographers of his generation, Mario Testino is a name that needs no introduction in the realms of fashion. In a career that has spanned over 40 years he has worked for publications such as Vogue, V Magazine, Vanity fair, GQ as well brands like Gucci, Burberry, Versace and Michael Kors to Chanel and many others.

Mario was born in Lima in 1954 to a traditional Catholic family. The oldest of six children, he grew up detached from the world of fashion and Hollywood and actually wanted to become a priest. He then pursued a degree in economics at La Universidad del Pacífico and Pontificia Universidad Catolica del Peru. It wasn’t until 1976 when he moved from Peru to London that Mario was introduced to his newfound passion for photography. His first step to the world of photography was through an apprenticeship at the studio of John Vickers and Paul Nugent. This was followed up by a gig for British Vogue. The shackles came off as unlike in Peru, London gave Mario a platform to explore his passion and express himself freely. Despite early struggles where he had to wait tables, his natural knack for photography allowed him to thrive under the new environment and his career took off.

Testino drew inspiration from his experience of growing up in Peru and teenage summers in Brazil which helped him develop his own unique style. This style helped him to become one of the most decorated photographers in the world. From A-list stars and musicians to supermodels and artists, his journey has seen a plethora of subjects. His work has been featured in the likes of Vogue, GQ, Vanity Fair etc and in addition, he has had 18 exhibitions and 16 books published about his work.

His work with the royal family is arguably his most recognised, particularly his series with Diana, Princess of Wales in 1997 for Vanity Fair. He was also the official photographer for the Duke and Duchess of Cambridge on the occasion of their engagement in December 2010 as well as the christening of their daughter, Princess Charlotte in July 2015. He has worked with many royal families similarly.

During the mid-90’s, his collaboration with Tom Ford and fashion stylist Carine Roitfeld helped revive Gucci as a major fashion house. He had an uncanny ability to mix commerce with art and this ability quickly led him to become one of the most prolific fashion photographers in the world. He also helped kickstart the careers of supermodels Gisele Bundchen and Kate Moss.

However, it wasn’t only the fashion realms where Testino was turning heads, his talent saw him gain popularity outside as well. His exhibition titled Portraits in 2002 at the National Portrait Gallery in London attracted a record number of visitors at the time. This record stood for an entire decade and also launched him globally through a world tour.

Aside from photography, Testino is also an avid fan of art and has collaborated with artists such as Keith Haring, Vik Mubiz, John Currin and Julian Schnabel to create pieces. His personal collection has even been the subject of two exhibitions, the Somos Libers in 2013 at MATE- Museo Mario Testino in Lima, Peru and the Somos Libres II at the Pinacoteca Giovanni e Marella Agnelli in Turin Italy.

In recognition of his career and charity work, Testino was awarded with an honorary OBE on 14 January 2014 by UK Culture Minister Ed Vaizey. He also gained an Honorary Fellowship via The Royal Photographic Society in 2011 and in the same year was granted the GQ Man of the Year Inspiration Award.

Testino is also the recipient of The Grand Cross rank of the Order of Merit for Distinguished Service in Peru (2010)  and The Tiradentes Medal in Brazil (2007). His stellar career has also seen him win a Walpole Ward for services to the luxury industry (2009), the Rodeo Drive Walk of Style Award (2005) and the British Style Award (2003).

His frequent collaborators include:

Testino is a recipient of The Grand Cross Order of Merit in Peru, which is the highest honour in his native country for his numerous contributions to non-profit causes and charitable organisations. He was also appointed as President of the Board of World Monuments Fund Peri in 2014.

His work with a Save the Children ambassador helped to raise funds to build the El Salvador Clinic in the Pueblo Nuevo District, Chincha in his native Peru. The clinic was built to help children with tuberculosis who were affected by a devastating earthquake which hit Peru in August 2007. The entire project was funded by the sale of one of his portraits of Princess Diana which was auctioned for £100,000.

He also helped raise funds for Natalia Vodianova’s Naked Heart Foundation in order to build a children’s hospital that specialises in cancer. This was a cause close to his heart as he lost his 10 year old brother to the disease.

In July 2013, Testino opened his first non-profit association in Barranco, Lima. Museo Mario Testino was established to act as a platform to preserve Peruvian art through the cultivation and promotion of culture and heritage. He has also helped restore a 13,000 sq. ft. mansion built in 1898. The mansion is now a permanent venue to exhibit his works and the works of other local and international artists.

Honorary Officer of the Order of the British Empire (2014)

Honorary Officer of the Order of the British Empire (2014)

Best Photographer in the World Award (2014)

Walpole Award for services to the luxury industry (2009)

Doctor Emeritus of the University of the Arts London (2004)