An Italian luxury brand of fashion, clothing and leather goods

Gucci is an Italian luxury brand of fashion, clothing and leather goods and one of the current highest-selling Italian brands.

Gucci was founded by Guccio Gucci in Florence, Tuscany, in 1921. In the year 2013, the brand was valued at US$12.1 billion, with sales of US$4.7 billion. In 2019, in the Forbes World’s Most Valuable Brands list, Gucci is ranked the 30th most valuable brand, with a brand value of $18.6 billion. Gucci generated about $9.8 billion in revenue worldwide in 2019 according to Forbes.

Gucci operates about 278 directly operated stores worldwide, and it wholesales its products through franchisees and upscale department stores. As of 2019, François-Henri Pinault is the current Chairman and Chief Executive Officer.

Together with three of his sons, Aldo Gucci (1905–1990), Vasco Gucci (1907–1975), and Rodolfo Gucci (1912–1983), Gucci expanded the company to include stores in Milan and Rome as well as additional shops in Florence. Gucci’s stores featured such finely crafted leather accessories as handbags, shoes, and his iconic ornamented loafer as well as silks and knitwear in a signature pattern.

The company made handbags of cotton canvas rather than leather during World War II as a result of material shortages. The canvas, however, was distinguished by a signature double-G symbol combined with prominent red and green bands. After the war, the Gucci crest, which showed a shield and armored knight surrounded by a ribbon inscribed with the family name, became synonymous with the city of Florence.

Aldo and Rodolfo Gucci further expanded the company’s horizons in 1953 by establishing offices in New York City. Film stars and jet-set travelers to Italy during the 1950s and 1960s brought their glamour to Florence, turning Gucci’s merchandise into international status symbols. Movie stars posed in Gucci’s clothing, accessories, and footwear for lifestyle magazines around the world, contributing to the company’s growing reputation. 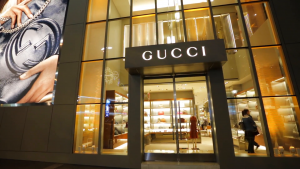 Gucci’s distinctive lines made its products among the most frequently copied in the world in the early 2000s.

Gucci’s distinctive lines made its products among the most frequently copied in the world in the early 2000s. Pigskin, calf, and imported exotic animal skins were subjected to various methods of fabrication. Waterproof canvas and satin were used for evening bags. Bamboo was first used to make handbag handles by a process of heating and molding in 1947, and purses made with a shoulder strap and snaffle-bit decoration were introduced in 1960. In 1964 Gucci’s lush butterfly pattern was custom-created for silk foulards, followed by equally luxuriant floral patterns. The original Gucci loafer was updated by a distinctive snaffle-bit ornament in 1966, while the “Rolls-Royce” luggage set was introduced in 1970. Watches, jewelry, ties, and eyewear were then added to the company’s product lines. A particularly iconic touch, introduced in 1964, was the use of the double-G logo for belt buckles and other accessory decorations.

The company prospered through the 1970s, but the 1980s were marked by internal family disputes that brought Gucci to the brink of disaster. Rodolfo’s son Maurizio Gucci took over the company’s direction after his father’s death in 1983. Maurizio proved to be an unsuccessful president; he was compelled to sell the family-owned company to Investcorp, a Bahrain-based company, in 1988. The new investors promoted the American-educated Domenico De Sole from the position of family attorney to president of Gucci America in 1994 and chief executive in 1995.

The company had previously brought in Dawn Mello in 1989 as editor and ready-to-wear designer in order to reestablish its reputation. Well aware of Gucci’s tarnished image and the value of its name brand, Mello hired Tom Ford in 1990 to design a ready-to-wear line. He was promoted to the position of creative director in 1994. Before Mello returned to her post as president of the American retailer Bergdorf Goodman, she initiated the return of Gucci’s headquarters from the business center of Milan to Florence, where its craft traditions were rooted. There she and Ford reduced the number of Gucci products from 20,000 to 5,000. 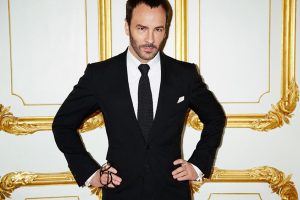 Mello hired Tom Ford in 1990 to design a ready-to-wear line. He was promoted to the position of creative director in 1994.

There were seventy-six Gucci stores around the world in 1997, along with numerous licensing agreements. Ford was instrumental in the process of decision-making with De Sole when the Gucci Group acquired Yves Saint Laurent Rive Gauche, Bottega Veneta, Boucheron, Sergio Rossi, and, in part-ownership with Stella McCartney, Alexander McQueen and Balenciaga. By 2001 Ford and De Sole shared the responsibility for major business decisions, while Ford concurrently directed design at Yves Saint Laurent as well as at Gucci.

The French conglomerate Pinault-Printemps-Redoute, however, gained ownership of 60 percent of the Gucci Group’s stock in 2003. Women’s Wear Daily then announced the departure of both Domenico De Sole and Tom Ford from the Gucci Group when their contracts expired in April 2004. The last spring collection under the direction of Ford and De Sole was a critical and commercial success. Amid widespread speculation in the fashion press about Ford’s heir, the company announced in March 2004 that he would be replaced by a team of younger designers promoted from the ranks of the company’s staff.

As announced in December 12, 2014, Creative Director Frida Giannini and CEO Patrizio di Marco were to step down from Gucci. Marco Bizzarri was appointed CEO of the brand.

In 2017, Bizzarri said, “Being socially responsible is one of Gucci’s core values, and we will continue to strive to do better for the environment and animals,” and therefore fur would be banned from Gucci collections as of 2018. In August 2018, Gucci launched online operations in New Zealand.

Gucci has been very active since its very inception with marketing campaigns including TV spots, printed ads, and more recently, a strong digital marketing focus.

Gucci has created strong partnerships with Hollywood celebrities and social media influencers, working closely with these individuals to reach more demographics and re-establish its identity as a new, modern brand; despite the fact that it has been around for a while. The brand has changed directions in working with the type of celebrities, with Gucci now dressing contemporary style icons like Rihanna, Blake Lively, Brad Pitt, Rachel McAdams, Harry Styles and Salma Hayek, who can be easily resonated with millennials.

Along with this, Gucci has worked closely with internet stars and has transformed many up and coming Instagram users into luxury-brand stars. These collaborations have been proven to be successful due to the associations with opinion leaders who try to influence the purchasing behaviours of opinion seekers, who are actively searching for information to assist with their purchasing behaviours and decisions. As research has found that consumers make purchases based on what they mean and see items as a sense of their extended self, this form of word-of-mouth marketing can be used to influence the brand’s meaning and thus, influence the probability of purchases.

From 2016, Gucci’s Internet presence has grown with more people searching for the brand online. In 2017, the brand saw a 115% increase in growth, with over $61,798,514 earned in media value. Furthermore, the fashion house saw a 44.5% increase in revenues in the nine months ending 30th September 2017. This growth can be linked to the success of their digital marketing strategies, which has allowed the brand to integrate the digital world to the in-store experience, and communicate to a larger target audience. Gucci saw a 130% web traffic increase from 1.8M site visits in January 2017 to 4.2M visits in December 2017. 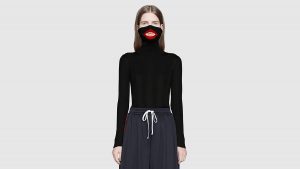 Gucci produced controversial advertisements that many believe sexualizes and objectifies women. Erving Goffman conducted research on advertisements and how they are consistently reinforcing common stereotypes of women. He outlined different characteristics commonly found in media that tend to favor men over women. These stereotypes, which can all be found in Gucci’s advertisements, include relative size, ritualization of subordination, feminine touch, and function ranking.

Almost all of Gucci’s advertisements include a woman who is being dismembered to show off a certain part of her body, positioned in a way, that some would consider, sexualizes her body, or made much smaller in size to appear submissive to the counterpart (usually a male) in the ad. Jean Kilbourne describes how often advertisements are working to undermine women and place women in positions of passivity. Many people find these advertisements offensive and in turn many organizations have publicly criticized Gucci. The Fashion Law, a fashion legal and business website, argues that the infamous line “sex sells” is proven through Gucci’s continual use of scandalous advertisements and correlating sales.

In early 2003 Gucci produced a highly popular advertisement which pictured a supermodel with her pants pulled down and her pubic hair shaved into a “G”. The Advertising Standards Authority (United Kingdom) received countless complaints from people and organizations, including the director of mediawatchuk demanding the ad be banned due to his belief it was “harmful to society”. Many believed that the outcry regarding the ad just fed the idea that Gucci was using sex to successfully sell their products. Although this was a point of contention between Gucci and the Advertising Standards Authority, scholars have shown that Gucci continues to walk the thin line between offensive and acceptable advertisements.

The Italian luxury brand still continues to publish controversial ads. Gucci used a short film and images with reference to a cult film about drug addiction. This advertisement received a lot of backlash primarily because one of their young models was unhealthily thin according to the Advertising Standards Authority. This advertisement sounded shocking to many, but to the advertisement industry it was regarded as a prime example of what companies are supposed to do. William O’Barr argues that advertisements’ main priority is to break through and draw the consumer’s attention, regardless of what is deemed appropriate in society’s eyes.