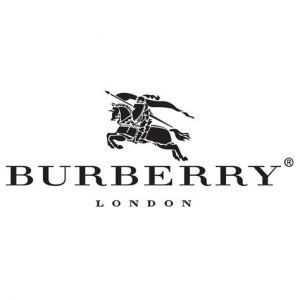 Burberry Group PLC is a British luxury fashion house headquartered in London, England. Established in 1856 by Thomas Burberry, it was originally focused on the development of outdoor attire. Since then the fashion house has moved into the high fashion market its main fashion house focuses on and distributes trench coats, ready-to-wear outerwear, fashion accessories, fragrances, sunglasses, and cosmetics.

The company is currently listed on the London Stock Exchange and is a constituent of the FTSE 100 Index. In 2015, Burberry ranked 73rd in Interbrand’s Best Global Brands report, alongside Louis Vuitton and Prada. Burberry directly operates over 500 in 51 countries.

In 1856 Thomas Burberry established Burberry in Basingstoke at just 21 years old, founded on the principle that clothing should be designed to protect people from the British weather.

Twenty years later, in 1879, he came up with an innovative idea: the gabardine. This clothe featured a breathable, weatherproof and hardwearing fabric revolutionising rainwear – which up until then had typically been heavy and uncomfortable to wear. Gabardine was then patented in 1888. As a proof of its success, in 1893, Norwegian polar explorer, zoologist and recipient of the nobel peace prize, Dr Fridtjof Nansen became the first recorded polar explorer to take Burberry gabardine to the poles when he sets sail bound for the arctic circle.

That same year, the company run a public competition to design a new logo for the brand. The winning entry was inspired by 13th and 14th-century armour on display at the Wallace collection in London – and the equestrian knight device is born.

Later on, in 1908 air commodore Edward Maitland wore Burberry gabardine to travel from Crystal Palace to Russia in a hot air balloon. covering a distance of 1,117 miles in 31 ½ hours. He set the world’s long-distance overseas record and the british long-distance in-flight record.

In 1912, the tielocken coat, designed by Thomas Burberry, is patented. This coat is considered the predecessor to the trench coat, the tielocken closes with a single strap and buckle fastening and only features a button at the collar. A year later and having had a presence in London since 1891, Burberry moved to a larger London premises in Haymarket, designed by the noted architect Walter Cave.

During First World War (1914 – 1918), the Burberry trench coat is invented. This coat, what the company is actually most famous for, presents a functional design including epaulettes used to suspend military equipment such as gloves and whistles, D-rings used to carry grenades, the gun flap to provide additional protection when in action and the storm shield to allow water to run off it smoothly. After the war, it became popular with civilians.

The iconic Burberry check has been in use since at least the 1920s, primarily as a lining in its trench coats. Also, the company was registered as a trademark and introduced a lining to their rainwear.

Burberry also specially designed aviation garments. In 1937, A.E. Clouston and Betty Kirby-Green broke the world record for the fastest return flight from London to Cape Town in The Burberry airplane that was sponsored by the brand.

Burberry was an independent family-controlled company until 1955, when Great Universal Stores (GUS) assumed ownership. By 1965, one in five coats exported from Britain was a Burberry product.

Going forward, in 1972, Burberry formally acquired the factory in Castleford, the home of the Burberry trench coat, building on their manufacturing presence in the UK, a legacy that continues today.

Another attempt to modernize the company took place in 1999, when Burberry’s becomes Burberry and a new logo is designed by art director Fabien Baron. 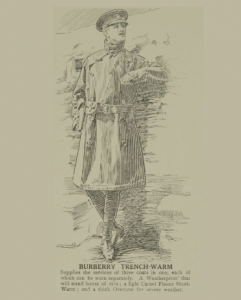 In 2006, Rose Marie Bravo, who as Chief Executive had led Burberry to mass market success through licensing, decided to retire. She was replaced by another American, Angela Ahrendts, who joined from Liz Claiborne in January 2006, and took up the position of CEO on 1 July 2006. Ahrendts and Bailey successfully turned around the then Chav-like reputation that the brand had acquired at the end of Bravo’s tenure and cheapening effect of the brand’s omnipresence, by removing the brand’s check-pattern from all but 10% of the company’s products, taking the fragrance and beauty product licenses back in-house and buying out the Spanish franchise that was worth 20% of group revenues.

Burberry first sold online in the US, then in the UK in October 2006, and the rest of the EU in 2007. Bailey became Chief Creative Officer in November 2009. It was reported in 2012 Ahrendts was the highest paid CEO in the UK, making £16.9m, the first time an English woman has held that title.

In October 2013, it was announced that Ahrendts would take up the position of Senior Vice President of retail and online at Apple, Inc. from April 2014, and be replaced as CEO by Bailey. During her tenure, sales increased to over £2 billion, and shares gained more than threefold to £7 billion. Although Burberry promotes its British connection, according to The Guardian, a British national daily newspaper, as of July 2012, Burberry maintains two production facilities in Great Britain, one in Castleford producing raincoats, and one in Keighley.

In 2016, Burberry had an increase in reported profits, with 77 percent of sales coming from Burberry’s stores. The increase was in part attributed to strong sales in Asia.

In May 2018 it was reported that Burberry had filed a lawsuit against Target claiming that Target had copied its check print designs and was seeking amount of $2 million, in addition to the amount to cover its legal fees.

In July 2018 it was reported that in the previous past five years Burberry had destroyed unsold clothes, accessories and perfume worth over £90m in order to protect its brand and prevent the items being stolen or sold cheaply. While a representative of Greenpeace criticised the decision, Burberry claimed that the energy generated from burning its products was captured, making it environmentally friendly. According to Burberry’s annual report, by the end of the financial year 2018, the company had destroyed goods worth £28.6m, an increase on the £26.9m from its financial year 2017. In September 2018, Burberry reported that it would stop the practice of burning unsold goods, with immediate effect. Burberry also announced it would stop using real fur in its products, and would phase out existing fur items.

In February 2019 Burberry apologized for showcasing a hoodie that featured a noose around the neck during its show at London Fashion Week. The retailer said it has removed the item from its collection, after criticism from one of its own models led to an online backlash.

Burberry is recognised as industry leader in the Dow Jones Sustainability Index in the ‘Textiles, Apparel and Luxury Goods’ sector. In fact, in 2017, the company and the Royal College of Art (RCA) announced the establishment of the Burberry Material Futures Research Group, with the aim of applying radical thinking to invent new sustainable materials, transform consumer experience and advance manufacturing to benefit the industry and wider community.

Burberry has reportedly celebrated diversity and inclusivity with the Rainbow Vintage check throughout its February collection and makes donations to three leading organisations – the Albert Kennedy Trust, the Trevor Project and ILGA – all dedicated to supporting LGBTQ+ youth around the world.

Burberry joined the Ellen MacArthur Foundation ‘make fashion circular’ initiative in 2018 as a core partner, to help develop solutions to some of the biggest environmental issues faced by the fashion industry and work towards a circular economy.

Considering the varied social, environmental and economic impacts of the luxury industry on communities worldwide, the Foundation is dedicated to using the power of creativity to drive positive change in our communities and build a more sustainable future through innovation. It is therefore taking a long-term approach and focusing its grant-making on promoting the STEAM agenda, tackling educational inequality, reducing waste and supporting social and economic development.

The company support the Foundation with an annual donation and partner with it to achieve our goal to positively impact 1 million people by 2022. During 2017/18, five-year partnerships have been launched with Teach First and The Careers & Enterprise Company, the Royal College of Art, Oxfam, Pur Projet and Elvis & Kresse.