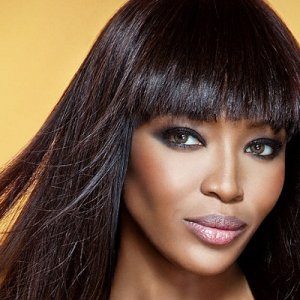 Naomi Campbell is one of the top supermodels of all time 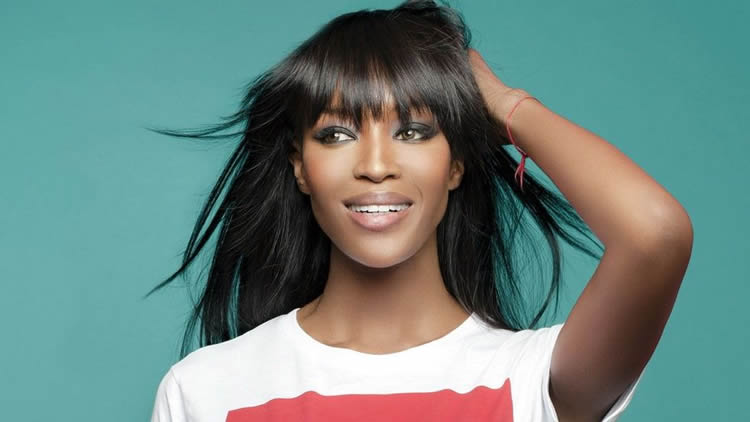 Naomi Elaine Campbell is a model, actress, businesswoman and fashion influencer. Naomi was born in London and was discovered at the age of 15. She is one of the icons of the fashion industry and has become one of the most recognizable and in-demand models, specially in the late 1980s and the 1990s. Such has been her success that Naomi Campbell has been named one of six models of her generation declared supermodels by the fashion industry professionals, brands and the international press.

In addition to her modeling career, Campbell has embarked on other ventures, which include an R&B-pop studio album and several acting appearances in film and television, such as the modelling competition reality show The Face, “The Cosby Show,” “The Fresh Prince of Bel-Air,” Madonna’s “Erotica,” Bob Marley’s “Is This Love” and Michael Jackson’s “In The Closet.” Campbell is also involved in charity work for various causes.

Naomi Campbell was born in Streatham, South London, as the daughter of Jamaican-born dancer Valerie Morris. As she never met his real father, Campbell took her surname from his mother’s second marriage. She attended Dunraven School and the London Academy for Performing Arts as a youngster. At the age of 10, and while living in Rome, she was accepted into the Italia Conti Academy of Theatre Arts, where she studied ballet.

Her first public appearance was a the age of 7, in 1978, when she was featured in the music video for Bob Marley’s “Is This Love”. Officially, her career took off just before her 16th birthday when she appeared on the cover of British Elle. 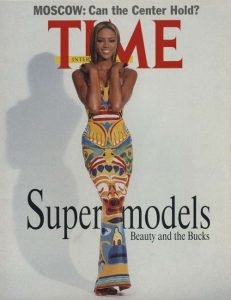 Naomi Campbell as cover of the TIME magazine

During the 1980s, Campbell’s career progressed steadily: she walked the catwalk for such designers as Gianni Versace, Azzedine Alaïa and Isaac Mizrahi, and posed for such photographers as Peter Lindbergh, Herb Ritts and Bruce Weber. And by the end of 1980, she has become already a supermodel. She was part of the trio known as the “Trinity” along with Christy Turlington and Linda Evangelista, who became the most recognisable and in-demand models of their generation.

In March 1991, in a defining moment of the so-called supermodel era, Campbell walked the catwalk for Versace with Turlington, Evangelista and Crawford, arm-in-arm and lip-synching the words to “Freedom! ’90”. Later that year, she starred as Michael Jackson’s love interest in the music video for “In the Closet”. In April 1992, she posed with several other top models for the hundredth-anniversary cover of American Vogue, shot by Patrick Demarchelier. That same year, she appeared in Madonna’s controversial book Sex, in a set of nude photos with Madonna and rapper Big Daddy Kane.

In the mid-1990s, Campbell branched out into other areas of the entertainment industry. Her novel Swan, about a supermodel dealing with blackmail, was released in 1994 to poor reviews. It was ghostwritten by Caroline Upcher, with Campbell stating that she “just did not have the time to sit down and write a book.” That same year, she released her album Baby Woman, which was named after designer Rifat Ozbek’s nickname for Campbell Produced by Youth and Tim Simenon, the album was only commercially successful in Japan; it failed to reach the top 75 on the UK charts, while its only single, “Love and Tears”, reached No. 40. Baby Woman was mocked by critics, inspiring the Naomi Awards for terrible pop music. During the mid-1990s, Campbell also had small roles in Miami Rhapsody and Spike Lee’s Girl 6, as well as a recurring role on the second season of New York Undercover.

The end of the supermodel era

In 1998, Time magazine declared the end of the supermodel era. Campbell then continued modelling, both on the runway and, more frequently, on print, though less often and losing impact over time. In 2007, she walked the catwalk for Dior’s 60th-anniversary fashion show at Versailles. And Campbell performed with Kate Moss and other supermodels in the closing ceremony of the 2012 Olympic Games, where they modelled haute couture to represent British fashion. Campbell wore a design by Alexander McQueen—a staggered hem gown with a train speckled with flecks of gold.

Campbell is still present in many fashion events as a reference for the industry and also in entertainment. For example, in 2015, Campbell signed on as a recurring character in the Fox drama Empire as Camilla Marks, a fashion designer and love interest to Hakeem Lyon, portrayed by Bryshere Y. Gray. In October 2015, Campbell was featured in a two-episode arc in American Horror Story: Hotel, as a Vogue fashion editor named Claudia Bankson. And in 2019, Campbell received the first beauty contract of her career, with NARS Cosmetics.

Naomi Campbell has graced the covers of more than 500 magazines during her career, and has been featured in campaigns for Burberry, Prada, Versace, Chanel, Dolce & Gabbana, Marc Jacobs, Louis Vuitton, Yves Saint Laurent and Valentino.

In 2018, as every year, the international fashion community honors the best and brightest in American design at the CFDA Fashion Awards. Naomi Campbell has received the prestigious Fashion Icon Award at the CFDA’s ceremony on 4 June.

Despite her status as the most famous black model of her time, Campbell never earned the same volume of advertising assignments as her white colleagues, and she was not signed by a cosmetics company until as late as 1999. In 1991, she said, “I may be considered one of the top models in the world, but in no way do I make the same money as any of them.” Throughout her career, Campbell has been outspoken against the racial bias that exists in the fashion industry. In 1997, she stated, “There is prejudice. It is a problem and I can’t go along any more with brushing it under the carpet. This business is about selling, and blonde and blue-eyed girls are what sells.”

Campbell is also responsible for an incredible amount of fundraising and charity work in South Africa and across the globe. She began charity work with Nelson Mandela in 1993, and in 1997 he named her “Honorary Granddaughter” for endless activism.

In 2005, she established Fashion For Relief and hosted its first charity fashion show to raise funds for victims of Hurricane Katrina in New Orleans. Since its conception in 2005, Fashion For Relief has presented shows in New York, London, Cannes, Moscow, Mumbai and Dar es Salaam, and has raised millions of dollars for various causes.
By 2011, Fashion for Relief had reportedly raised £4.5 million. In 2018 Campbell held another Relief charity gala and the theme was Race To Equality.

In 2012, the charity teamed up with YOOX China and leading global and Chinese fashion designers, including Phillip Lim and Masha Ma, to design Chinese-themed T-shirts to help fund its efforts and the various international charities it works with. Since 2007, Campbell has been the honorary president of Athla Onlus, an Italian organisation that works to further the social integration of young people with learning disabilities. In 2009, Campbell became a goodwill ambassador for the White Ribbon Alliance for Safe Motherhood. She has since joined the charity’s patron, Sarah Brown, the wife of former British prime minister Gordon Brown, on several missions to promote maternal health.