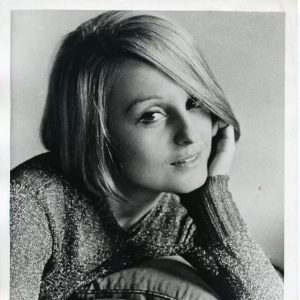 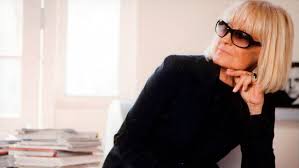 Barbara Hulanicki is best known as the founder of clothes store Biba. She is deservedly recognized now as a British fashion icon and has been awarded an OBE for Services to Fashion in the 2012 Queen’s New Year Honors. Barbara began her career in Fashion in the early 1960′s working as a freelance fashion illustrator covering all the important fashion collections for the major publications of the day, including Women’s Wear  Daily, British Vogue, the Times, the Observer and the Sunday Times.

Barbara Hulanicki was born in Poland in 1936  to Polish parents, but raised in England.Her father, Witold Hulanicki, was assassinated by the Stern Gang in Jerusalem in 1948,and the family moved to Brighton, England.She studied at the Brighton School of Art, now the University of Brighton Faculty of Arts  from 1954 to 1956.

Hulanicki won a London Evening Standard-newspaper competition in 1955 for beachwear. She began her career in fashion as a freelance fashion illustrator for various magazines, including Vogue, Tatler and Women’s Wear Daily.Hulanicki sold her first designs through a small mail-order business that was featured in the fashion columns of newspapers such as the London Daily Mirror.

She kept designing for labels such as Fiorucci and Cacharel and from 1980 to 1992 designed a line of children’s wear, Minirock, licensed to the Japanese market. In 1981 she opened a new shop in the UK.In 1987 she moved to Miami, Florida, where she opened an interior design business,designing hotels for Chris Blackwell in Jamaica and the Bahamas. She has designed wallpaper for the Habitat store chain in Europe and launched a fashion and home range in India and also wallpaper in her widely recognised Art Deco style for Graham & Brown.

In 1980, she returned to the UK from living in glamorous Brazil to open a series of clothing boutiques and start a make-up line, all under her own name. From 1980 to 1987, she dabbled in fashion photography for the London Evening Standard and returned briefly to fashion illustration to draw Sarah Ferguson’s wedding dress for the London newspapers. In 1983 she wrote her memoirs in the book FROM A TO BIBA, which was published by Hutchinson’s.

British retailer Topshop opened a New York City store in April 2009 and later that month launched a collection featuring Hulanicki’s designs. She produced a collection for Topshop featuring billowing chiffon dresses and blouses reminiscent of her original Biba style along with several jersey pieces printed with her original illustrations, bikinis and a cropped suede jacket. In the same month, a handbag in her Art Deco style was made by the Italian label Coccinelle.

Additionally, throughout her career, Hulanicki has designed costumes for several stage and film productions, including clothing for Cathy McGowan on the influential live TV rock show “READY STEADY GO” (1964), outfits for Julie Christie in “DARLING” (1965), costumes for local productions in Miami Beach, costumes for old friend and Biba model Twiggy for “CAPTAIN BEAKY” in London’s West End and her Royal Command Performance in 1976.

In 1964 she founded, with her late husband, Stephen Fitz-Simon, the boutique BIBA,in the Kensington district of London. The shop soon became known for its “stylishly decadent atmosphere” and decor inspired by Art Nouveau and Art Deco. It became a hangout for artists, film stars and rock musicians, including Mick Jagger and The Rolling Stones, David Bowie, Marianne Faithfull and Cathy McGowan, presenter of British pop/rock TV programme Ready Steady Go!.

After the shop’s 1975 closure, Hulanicki moved to Brazil, where she opened several other stores.In 2009, the British department store group House of Fraser bought the rights to the Biba label. In 2014, Hulanicki agreed to serve as a consultant for Biba, the first time since 1975 that she had been involved with her created brand.

2009: The Royal Society for the encouragement of Arts, Manufacturers and Commerce (RSA) inducted her as a Royal Designer for Industry.

2012: Hulanicki was appointed Officer of the Order of the British Empire (OBE) in the New Year Honours for services to the fashion industry.