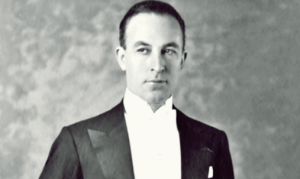 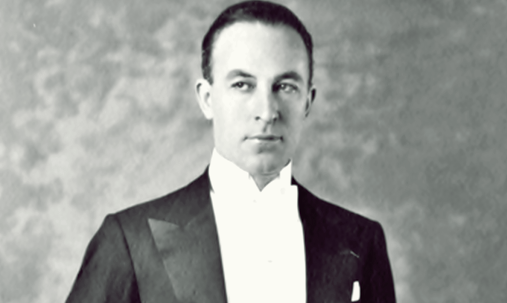 French couturier Jean Patou revolutionised Twenties Fashion and fragrance. Though critically acclaimed for his fragrance, Joy, which in 1929 was known as “the most costly perfume in the world”, Patou’s influence can be seen in everything from women’s sportswear to iconic cubist sweaters and men’s silk ties.

Jean-Alexandre Patou, renamed Jean Patou, was born in Normandy, France in 1880. His father was a prosperous tanner and his uncle sold furs. Patou worked with his uncle, then moved to Paris, aspiring to become a couturier. In 1912, he opened “Maison Parry”, which was so successful that a New York retailer bought the entire collection. Sadly, World War I brought the house to a halt, and he was drafted into the army as Captain in a French Zouave regiment.

CAREER IN FASHION AND FRAGRANCE

When Patou returned from the front, he relaunched the brand with what would be the most influential looks of the era — sportswear for women, jersey swimwear, sweaters with cubist-style color blocks and the “designer tie” cut from silk fabrics. His muse, tennis champion Suzanne Lenglen, appeared on court at Wimbledon wearing a white knee-length pleated silk skirt, white sleeveless sweater and orange headband, designed by Patou. It made headlines and Patou worked with French textile manufacturers Bianchini-Ferrier and Rodier to develop sportswear fabrics. By 1922, he introduced sportswear- influenced daywear and opened a specialised sportswear boutique “le coin des sports” within his couture house, presenting looks for aviation, yachting, tennis, golf, riding and fishing. He has also been credited as creator of the triangular sports scarf worn knotted at one shoulder. Although he was renowned for chic daywear, his evening wear was acclaimed for intricate detailing. One of his most critically acclaimed looks was a crystal-embroidered satin gown worn with Turkish trousers and Capuchin hood — worn with fringed brocade mules. Many ensembles had lingerie detailing and Patou’s new color, “dark dahlia”, often replaced black for formal occasions. In no time, he was in the same league as Chanel. His methodology was simple. Each season, he provided his in-house designers with antique textiles, embroideries and detailed instructions for the styles and palette he wanted to develop, which he later modified till he was satisfied with the finish. Between 1919 and 1924, the house revenue dramatically increased and his store on rue Saint-Florentin Paris attracted the elite. In 1925, he opened boutiques in Monte-Carlo and New York.

When the stock market crashed in the Thirties, so did the market for luxury fashion. The House of Patou survived through its diversification into fragrance. Initially, Patou developed perfumes in alliance with Raymond Barbas. In 1925 he introduced three fruit-floral fragrances: Amour Amour, Que sais-je, and Adieu Sagesse. Within his couture house he installed a cubist-style bar with a “bartender” who mixed bespoke perfumes. Other fragrances that Patou introduced include Moment Suprême, Le Sien, Cocktail, Invitation, Divine Folie, Normandie and Vacances. The most legendary, however, was Joy, one of the most expensive fragrances in the world — created by perfumer Henri Alméras for the brand. It was a hit with the jet set including Grace Kelly and Jacqueline Kennedy. In 1928, Patou conceived “Huile de Chaldée”, the first sun tan lotion.

Sadly, his career was short-lived due to his untimely death in1936, and his sister and brother-in-law took over the reins and Raymond Barbas became chairman. Marc Bohan took over artistic direction in 1954 followed by some of the iconic figures in fashion — Karl Lagerfeld, Michel Goma, Jean Paul Gaultier, Angelo Tarlazzi and Christian Lacroix. After Lacroix left, The House Of Patou ceased activity. Procter & Gamble marketed “Joy” from 2001 to 2011 before Designer Parfums took over. Jean Patou was acquired in 2018 by the LVMH group — which signed a strategic agreement with Designer Parfums to take over the clothing division.

1924: To highlight that his designs were as well suited to the “American Diana” as the “Parisian Venus,” Patou brought six American models to Paris.

2000: “Joy” was voted “Scent of the Century” at Fragrance Foundation FiFi Awards, beating “Chanel No. 5”.