Fendi is acclaimed for its furs, leather goods and ready to wear 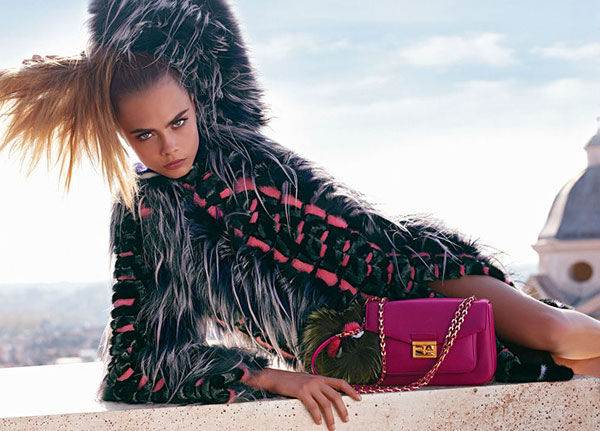 Founded by Adele and Edoardo Fendi as a leather and fur atelier in Rome in 1925, Fendi evolved as a maison legendary for its craftsmanship and creativity. The Italian fashion house, acclaimed for its furs, leather goods and ready to wear, has been continually raising the bar in the luxury segment.

When Edoardo Fendi married Adele Casagrande, a fur designer with a modest atelier, in 1925, the company took the name of Fendi and its fur and leather goods became popular among the European aristocracy. In 1946, the couple passed the baton to their daughters Anna, Carla, Paola, Franca and Alda and each of them had twenty per cent stake. Karl Lagerfeld joined Fendi in 1965 as Creative Director of the luxury fashion brand’s fur and women’s ready-to-wear. With him at the helm, precious furs were redesigned as he experimented with materials, patterns, finishes, weight, tanning methods and colors supported by advanced technological craftsmanship. Rather than reserving fur for coats, Lagerfeld used it in accessories and ready-to-wear, making precious fur accessible. He also designed the iconic Double F logo and was responsible for launching ready-to-wear in 1977 and a line of shoes the following year. It was a hit among the high brow. In 1972, Sophia Loren posed for Vogue with Fendi bags, booklets, cases and shoe bag and confessed her love for the brand. Silvia Venturini Fendi, daughter of Anna, joined the fashion house in 1994 and has since been Creative Director of accessories and menswear, and debuted the iconic Baguette. The A-list set loved it including Madonna and Naomi Campbell, and the It Bag became a rage when Carrie Bradshaw pronounced it as her favourite in Sex and the City.

Fendi remained a family-controlled company until 1999, when Italian fashion house Prada and French luxury goods company LVMH collaborated to purchase 51 per cent stake. Gucci Group NV lost out in the bidding. The sale handed the reins of Fendi to Bernard Arnault, Chairman, LVMH and Patrizio Bertelli, Chairman, Prada but gave the creative control and general management to the Fendi family. The brand reportedly lost 20 million euros in 2001 and the following year; consequently Prada sold its stake to LVMH, which gave it a 51 per cent stake while the Fendi family retained 49 per cent. With the financial support of LVMH, the Fendi family and Karl Lagerfeld focused on the creative side of the business. In these years, Fendi experienced a revival, with its expertise and ability to remain relevant. In 2009, the brand launched Peekaboo and other iconic bags such as Silvana, By The Way and 2Jours.

Close to its hundredth anniversary, Fendi became popular among millennials with collections that blended traditional craftsmanship with streetstyle. The brand became a streetstyle cult, with dresses and bombers embellished with the monogram and iconic bags like Kan I. In 2017, Fendi launched a customization shop for bespoke handbags in alliance with e-commerce platform Farfetch. Taking the art of craftsmanship back to the days where products were created individually for the customer, it was good business acumen. In September 2020, British fashion designer Kim Jones was announced Artistic Director of Fendi womenswear alongside his position at Dior Homme. The luxury brand continues to forge forward, with the intent to be more sustainable, using recycled materials and creating less wastage.

Our culture aims to serve the needs of our most demanding customers and transform dreams into reality.

Fendi is synonymous with luxury, excellence and craftsmanship, virtuosity in the processing of materials and timeless style.