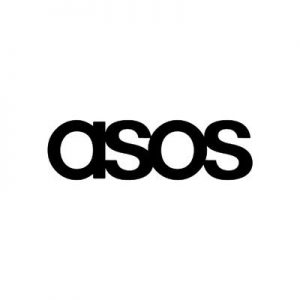 ASOS plc is a British online fashion and cosmetic retailer focused on promoting equality, social impact, labour rights, defending LGTBI+ rights and the environment. The company was founded in 2000 in London, primarily aimed at young adults. The website sells over 850 brands as well as its own range of clothing and accessories, and ships to all 196 countries from fulfilment centres in the UK, US and Europe.

ASOS’ headquarters are in Camden Town, at Greater London House with additional offices in Paris, New York, Berlin and Birmingham. As of 2019, the company has 168 suppliers who use 713 factories around the world.

ASOS was established on 3 June 2000, by Nick Robertson, Andrew Regan and Quentin Griffiths. In 2001, ASOS was admitted to the Alternative Investment Market (AIM) on the London Stock Exchange. In 2003, ASOS shareholders agreed to change the names of AsSeenOnScreen Holdings PLC and AsSeenOnScreen Limited to ASOS plc and ASOS.com Limited. In 2004, the company reported a maiden profit, with sales almost doubling in its first half. In 2004, ASOS introduced their own label for women’s clothing. 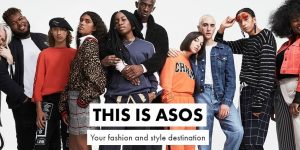 In 2005, the Buncefield Fuel Depot explosion led to the closure of the business for six weeks and £5m of stock was lost. In 2008, ASOS debuted kidswear on its site, however the branded market subsequently suffered declines at the expense of fast-growing own-label kidswear offers. In 2010, ASOS announced it would no longer offer kidswear, to concentrate on its core young adult fashion market.

In the final quarter of 2010, ASOS launched three international online shops in France, Germany and the US. In September 2011, they launched three more sites in Australia, Italy and Spain. In 2012, ASOS opened its first international office in Sydney, Australia, followed by an office in New York. Later on, the company launched its first drama-game show series, called #DIGIDATING, starring AJ Odudu. It was billed as an Internet dating show with backstage drama.

In 2013, ASOSs opened its first office outside the South East, in Birmingham. Later in 2013, ASOS recalled belts contaminated with radioactive cobalt-60, ASOS Russia and China were launched in the same. In 2014, a fire in their Barnsley warehouse caused them to stop taking orders for almost three days. In 2015, ASOS has over 4,000 employees and is the UK’s largest independent online and fashion beauty retailer. During the 2014 Formula One season, ASOS was a sponsor of the McLaren Formula One team.

In September 2016, an investigative report from Buzzfeed News alleged poor working conditions at ASOS’ warehouse. However, company spokespersons contended that the isolated complaints reported in the Buzzfeed article were not reflective of the general working conditions there. In 2017, workers continued to report that they often worked without regular breaks.

In April 2019, ASOS informed its clients through email that the company is looking into ways of changing its easy returns policy, after research showed customers manipulating the easy return process and the company admitted that the previous return policy was environmentally costly.

ASOS has reportedly defended the fashion democracy concept and it has started various initiatives to do so. For example, they promote body positivity, and offer their ASOS Brands in more than 30 sizes while committed to providing all sizes at the same price. Likewise, they try to promote a healthy body image and they work with more than 200 models to represent their audience. They state that they are not in the business of digitally altering the models’ appearance either. All of their models are part of the ASOS family and they support them by following a Model Welfare Policy.

They have also partnered with GLAAD, one of the biggest voices in LGBTQ activism, on a gender-neutral collection to unite in accelerating acceptance.

ASOS has also announced that they will be an official partner of the British Paralympic Association, providing the ParalympicsGB team with their formal and ceremonies outfits. Creating a bespoke collection that meets the athletes’ needs, as well as making them look and feel great, is a privilege and has improved their learning about designing adaptive clothing for a range of needs.

Regarding working conditions, the company has 168 suppliers who use 713 factories around the world. They affirm that they are serious about making sure every single person in that global supply chain is safe at work and has their rights respected and protected – that includes working towards ensuring all wages are sufficient not only to meet basic needs, but also provide some discretionary income. They set high ethical standards and support their suppliers to help them meet them. That is way they developed a world-leading Ethical Trade Strategy in 2017 with priorities including transparency; improving wages; health and safety; addressing and reducing modern slavery risks, and identifying and stopping child labour.

ASOS has also showed their commitment towards the environment. They believe great fashion shouldn’t come with a compromise, be that style, price or impact. That is why they have set theirselves challenging targets to reduce the impact of their product, business and logistics, and they are always looking for new ways to drive sustainability forward. They work hard to ensure animals don’t suffer for fashion and have strict sourcing guidelines for leather and producing animal-free products.

They also set up the ASOS Foundation that achieved full charity status in 2013 and provides infrastructure, training and support to enable disadvantaged young adults to reach their potential. The company works with charity partners to create sustainable, long-term change in the UK, India and Kenya, including The Prince’s Trust, Centrepoint, Udayan Care, SOKO Community Trust and Wildlife Works Carbon Trust.