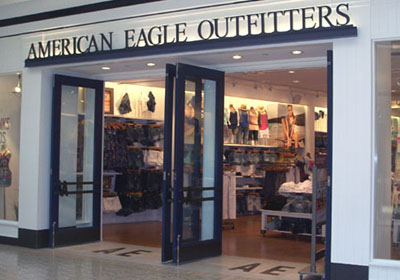 American Eagle Outfitters designs, markets and sells its own brand of casual wear at affordable prices. The company has more than a thousand stores in the US, Puerto Rico, Canada and the Middle East.

Despite reorganisation, American Eagle Outfitters began losing money and Schottenstein acquired the complete chain. Jay L. Schottenstein became Chairman and CEO of RVI, replacing Mark Silverman, and Roger Markfield was hired as President and Chief Merchant. Formerly with Macy’s and Gap, Markfield evolved American Eagle Outfitters to its present niche: private-label casual apparel with an outdoors look. When the company began trading on NASDAQ in 1994, it reportedly had a hundred and sixty seven stores, nine outlet stores and presence in thirty-four states. With cash infusion from the IPO, the company opened over ninety stores in the next year. Revenues reportedly quintupled to $1 billion by 2000. Embarking on an ambitious plan, the focus shifted to womenswear and accessories which witnessed huge profits, making it a $1 billion entity by 2000, with over a thousand store and twenty-five franchisee outlets.

This was a busy period for American Eagle as it introduced the AE Clear Card, the first clear credit card. which within a year accounted for fourteen per cent of total sales. The company also undertook West Coast expansion in Seattle and Tacoma, Washington and Portland, Oregon. To appeal to the youth, a website was launched. In February 2006, American Eagle Outfitters started sub- brands to sell specific set of products. One was Aerie, lingerie and sleepwear. The second, Martin + Osa, a line of cashmere sweaters and casual-wear for a older group. In March 2010, the management shut down Martin + Osa due to its failure. In 2008, American Eagle Outfitters launched 77kids, a line of kidswear. However, after a heavy loss again, the company sold 77kids to Ezrani 2 Corp, a company formed by Ezra Dabah, former Chairman and CEO of The Children’s Place. By then, the company had lost $44million to its failed attempts to make the sub- brand a success.

The brand’s first global advertising campaign debuted in 2016, featuring stylish young stars Troye Sivan, Michael Lockley, Hailee Steinfeld and Yara Shahidi with strong presence on social media, to appeal to the youth segment. In recent times, menswear and accessories has witnessed significant struggled, while lingerie and sleepwear sub-brand Aerie has become an important growth driver for the company, with revenues reportedly increasing from $310 million in 2015 to $650 million in 2018. Per Forbes, “American Eagle label’s shifting approach toward omnichannel retailing across its 931 stores and its e-commerce – will help the company boost its top line and profit margins once the Covid threat abates.”

To inspire customers to express their individuality by taking what we make and making it their own.

“American Eagle Outfitters is committed to the principle that the people who make our clothes should be treated with dignity and respect.”