A Diamond for Everyone! 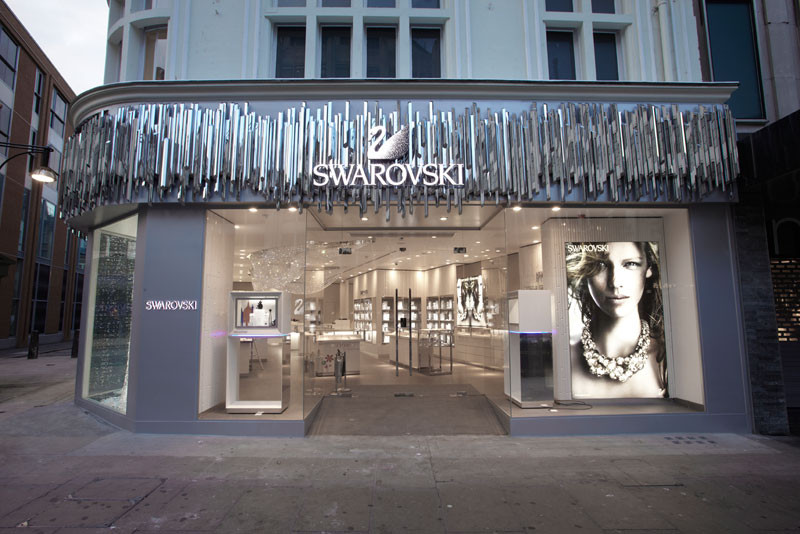 An inspiring entrepreneurial story, what began in 1895 as a modest crystal manufacturing business in Wattens, Austria is today the world’s leading brand of cut crystal.

Skilled in the art of glass-cutting, Daniel Swarovski apprenticed as a metalsmith in his father’s modest glass factory in Bohemia, now part of the Czech Republic. In 1883, he attended the International Electrical Exhibition in Vienna where inventions by trailblazers Edison and Siemens inspired him to harness hydro-electricity from the Inn river for the grinding processes. In 1891, Swarovski patented a machine which could cut crystal with more precision than by hand. In three years, Daniel Swarovski, with partners Armand Kosmann and Franz Weis, established a crystal-cutting factory in Wattens, Tyrol, Austria. It was named Swarovski.

With a vision to make “a diamond for everyone” by making crystals affordable, in 1899 the brand used the Edelweiss flower in its logo and expanded to France where it was acclaimed as Pierres Taillées du Tyrol or “cut stones from Tyrol”. In 1910-1913, Swarovski built its own glassworks factory. However during WWI, production ceased and when it resumed, the company manufactured grinding disks which were in short supply due to the war. Till date, Tyrolit Group is one of the leading suppliers of grinding, drilling and polishing tools.

The post- war ‘Golden Twenties’ witnessed Swarovski crystals in demand; it was seen in Parisian ateliers and an inspiration to iconic designer, Coco Chanel. In 1931, Swarovski created a crystal embellished band in collaboration with key couturiers. This was developed to accentuate short hairstyles of the era and considered the first ‘trend driven innovation’ by Swarovski. Later, the brand designed accessories collections in collaboration with designers Jean-Paul Gaultier, Mary Katrantzou, Christopher Kane and Hubert de Givenchy.

During the Great Depression and WWII, the factory shut down intermittently. A huge setback for the brand. In 1949, Swarovski Optik was created, which includes binoculars, telescopes and other precision optics. During the Fifties, crystal was a hit in haute-couture and Hollywood. In 1956, Swarovski collaborated with Christian Dior, creating a crystal coating that allowed light to refract from crystals in every color of the rainbow. However, it became a rage worldwide when Marilyn Monroe in ‘Gentlemen Prefer Blondes’, sang ‘Diamonds Are a Girl’s Best Friend’, sheathed in Swarovski.

Daniel Swarovski passed away on January 23, 1956. Within a few years, his three sons Alfred, Wilhelm and Fritz too passed away and the company was helmed by Daniel Swarovski II and Manfred Swarovski. In another milestone moment, Marilyn Monroe sang Happy Birthday to President John F. Kennedy in 1962 in a sheer chiffon dress sheathed with 2,500 Swarovski crystals. In 1966, Swarovski created its iconic ‘Sputnik’ design for the opening of New York Metropolitan Opera House. Crystal figurines were created as souvenirs for XXII Olympic Winter Games in Innsbruck which eventually led to the creation of the Swarovski Crystal Society. Two years later, the logo changed from the Edelweiss to the swan. After almost a hundred years of existence, Swarovski debuted its jewelry line and opened its first boutique in Bond Street, London. The brand continued its legacy of innovation by developing a bespoke crystal mesh fabric. Vivienne Westwood was the first to use it followed by Alexander McQueen.

On the brand’s 100th anniversary, it opened Swarovski Crystal Worlds as a sparkling shopping experience designed by multi-media artist André Heller. It is one of Austria’s leading tourist attractions till date. In 2002, Nadja Swarovski created Swarovski Crystal Palace in collaboration with designers. The following year witnessed Swarovski Crystal Rocks, the first crystal fabric using Hot-Fix technique, which can be ironed, stapled and glued to other materials. A celebrity favourite, Madonna appeared in designs by Arianne Phillips, embellished with thousands of Swarovski crystals. In 2006, Crystallised Swarovski Elements was introduced and Signity was created for Swarovski’s semi-precious products. In 2009, Swarovski Crystal Watches was launched and the following year, Swarovski created a curtain for the Oscars, handmade with 100,000 crystals. In 2013, The Swarovski Foundation was established to foster creativity and protect the environment. In 2017 Penelope Cruz becomes world ambassador of Swarovski and in 2018 Swarovski crystals embellished the Fantasy bra at the Victoria Secret show, worth over a million dollars.

Swarovski is now helmed by the fifth generation with CEO Robert Buchbauer, Nadja Swarovski and Mathias Margreiter on the Executive Board. “The company is currently being realigned along one common vision, one strategy and one organization. With a turnover of 2.7 billion euros and 29,000 employees worldwide, Swarovski is the world’s leading crystal and jewelry manufacturer,” states a communiqué.

To make diamonds for everyone by making stones affordable!

To create perfection, by cutting and polishing the gemstones meticulously, in order to emphasize the natural light and sparkle in the stones.