Rahul Mishra is an Indian fashion designer based in Delhi 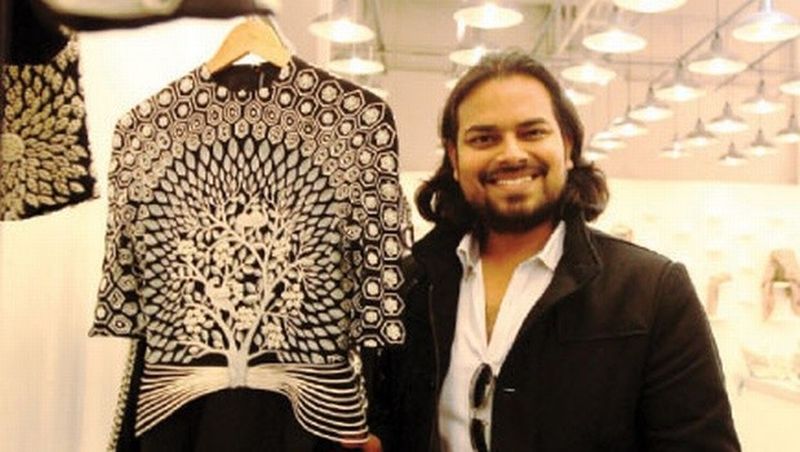 Rahul Mishra is an Indian fashion designer based in Delhi. He received the International Woolmark Prize in 2014 at Milan Fashion Week, becoming the first Indian designer to win the award. The winning collection was marketed in stores around the world.

In 2008, he was granted the MTV Youth Icon of the Year by MTV India.

Rahul Mishra was born on the 7th of November 1979. Mishra spent his childhood years in Malhausi, a small village 53 miles off Kanpur. He lived with his grandparents, who told him various stories –  religious, historical, moral, and humanity-related. He graduated in Physics from Kanpur University (now known as Chhatrapati Shahu Ji Maharaj University). Then he did a post-graduate course in apparel design at the National Institute of Design (NID), Ahmedabad, where he accomplished the Best Student Designer Of The Year in 2005.

In 2009, he became the first non-European designer to obtain a scholarship at Istituto Marangoni, Milan, Italy.

His wife Divya, also a NID graduate in apparel design, works with him.

“There is this quote by Mahatma Gandhi that I particularly love, recall the face of the poorest you have ever seen – and ask yourself if your contemplating will be of any use to them”. I live by this. You must do the best you can.” – Mishra for the Business Standard, 2014

He debuted in 2006 at Lakme Fashion Week with a collection utilising cotton handloom textiles from Kerala, especially off-white fabric with golden border of Kerala. In 2009, he made reversible dresses, employing Kerala mundu on one side, with Banarasi fabric of the other side woven by traditional craftsmen.

Mishra has showed his work at various fashion weeks: in London, Dubai, Australia, Paris. He has also become known for incorporating traditional Indian textiles, and handmade artisanship to his work. He is the only Indian designer to be chosen by Rent the Runway, online rental boutique.

In 2013, Malhausi won the Indian leg of the International Woolmark Prize and later, the 2014 Woolmark Prize at the Milan Fashion Week. The award carries an AUS $100,000 prize (over 5.4 million rupees) and has previously been won by designers like Karl Lagerfeld and Giorgio Armani. Mishra was the only Indian to have won the award.

“India should regard Rahul Mishra, the winner of the 2014 International Woolmark Prize, as a national treasure”.
— Suzy Menkes, Vogue.co.uk #SuzyPFW

The five contenders included Christopher Esber representing Australia, Sibling for Europe, ffiXXed for Asia and Joseph Altuzarra for the Americas. Mishra’s award-winning capsule range, “The Lotus Effect” was based on the hexagon shapes and Lotus motifs. The collection incorporated Chanderi fabric woven with 85% Merino wool with woollen zardozi embroidery by craftsmen in Kolkata. The collection was influenced by the monochromatic work of Dutch graphic artist Maurits Cornelis Escher. Mishra is the only Indian to have won the award. His work featured in London’s Victoria & Albert Museum in 2015 to 2016 following his Woolmark Prize in 2014.