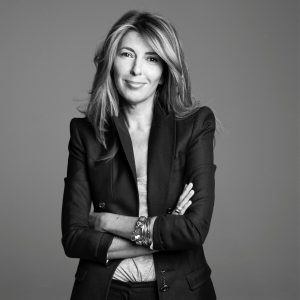 Ninotchka “Nina” García is the editor-in-chief of Elle and a judge on the Bravo/Lifetime reality television program Project Runway since its first season.Nina Garcia is the first Latin woman to head up a major fashion title in the US. She is also an author of four  New York Times bestselling books on fashion.

García was born May 3, 1965 in Barranquilla, Colombia, the daughter of a wealthy importer. Garcia’s introduction to magazines came in the form of Latin American fashion publication Vanidades.She graduated from the Dana Hall School in Wellesley, Massachusetts in 1983 and holds a bachelor’s degree from Boston University. Later she attended Esmod (École Supérieure de la Mode) in Paris and earned a bachelor’s degree in fashion merchandising in 1992 from the Fashion Institute of Technology (FIT).

Nina García is married to David Conrad, CEO of FocusPoint Private Capital Group.Together they have two children, Lucas and Alexander, and they live in New York.

Garcia began her career in the public relations department for Perry Ellis.  She later worked for then-designer, Marc Jacobs. García then moved to Mirabella, where she worked as Assistant Stylist and Market Editor until taking a position at Elle. She took a job at Elle magazine as associate editor and moved up to senior fashion editor. She became Fashion Director of Elle in 2000.She left the Fashion Director position in April 2008, becoming Editor-at-Large at the magazine until the end of August.

Garcia was named the creative director of Marie Claire in 2012, where she introduced award-winning fashion content and a new editorial section. Nina Garcia is currently the editor-in-chief of Elle, the No. 1 fashion magazine brand in the world, with 46 international editions.She succeeded Robbie Myers, who departed after 17 years at the title.

To millions in America, Garcia is more widely known as a long-time judge on Project Runway since its first season in 2004.  She has hosted the red carpet for ABC’s Oscar telecast and serves as a style expert on programs including Good Morning America, The View, Today, and CNN.

August 2008:  Garcia’s second book for Harper Collins, The One Hundred: A Guide to the Pieces Every Stylish Woman Must Own was released.

2010: García received an Oracle Award from Fashion Group International, and the Individual Achievement award from the Hispanic Federation.

2015: Garcia received the Champion of Educational Excellence Award from the Oliver Scholars Program.

2016: Garcia joined the advisory board of fashion tech company Nineteenth Amendment, a platform for independent fashion designers to launch collections and have their designs made on demand, sustainably in the US.