Public college for design, fashion, art, communications, and business and technology connected to the fashion industry

The Fashion Institute of Technology (FIT) is a public college for design, fashion, art, communications, and business and technology connected to the fashion industry. It is set in Manhattan, New York City and is part of the State University of New York (SUNY). It was founded in 1944.

As of 2017, there were 8,846 full time and part time students enrolled, of which 8,661 were undergraduate and 185 graduate. All these students were enrolled across 4 major schools within the college: 4,489 students were taking part in the Business & Technology School; 3,322 in Art & Design; and 113 in Liberal Arts. Likewise, the School of Graduate Studies offers seven master degree for graduate students.

Many important and top figures of the fashion industry have performed the entire or part of their studies in the institution, including fashion designers Norma Kamali, Calvin Klein, Michael Kors (who did not complete his studies there), interior designer Scott Salvator and the film director Joel Schumacher.

The FIT aims to prepare students for professional excellence in design and business through rigorous and adaptable academic programs, experiential learning, and innovative partnerships. “A premier public institution in New York City, FIT fosters creativity, career focus, and a global perspective and educates its students to embrace inclusiveness, sustainability, and a sense of community.” FIT

In the 1940s, fashion and apparel industry members were faced with a dwindling number of qualified people to help them run and carry on their businesses. The next generation wanted to be doctors and lawyers—not tailors. A group of industry members, led by Mortimer C. Ritter, an educator with an interest in programs for young working people, and Max Meyer, a retired menswear manufacturer, set about organizing a school to ensure the vitality of their businesses.

First, they created the Educational Foundation for the Apparel Industries to promote education for the industry. The Foundation then obtained a charter from the New York State Board of Regents to establish a “fashion institute of technology and design.” The institute opened in 1944 with 100 students, and was located on the top two floors of the High School of Needle Trades.

Soon, supporters wanted to bring greater prestige to the industry by having the institute become a college with the authority to confer degrees. Industrialists and educators decided on two majors: Design (with programs in apparel, millinery, and textiles) and Scientific Management. The curriculum also included Liberal Arts. In 1951, three years after the State University of New York had been established and state law had provided for the creation of community colleges, FIT became the second SUNY community college empowered to grant the Associate in Applied Science (AAS) degree. By then, there were 400 day students and about 1,000 evening students.

FIT received accreditation in 1957, and as the curriculum and student body grew, the college moved into its first real home—a nine-story building on Seventh Avenue in the heart of the garment district—in 1959. The building had been planned for 1,200 students; by 1963, there were 4,000. During this time, the college’s curriculum was growing beyond traditional notions of fashion, to include subjects like photography and advertising and interior design.

The college wanted to further expand its curriculum by offerings bachelor’s and master’s degrees— something that “was just not done” by a community college, according to the State University’s former chancellor. Representatives of the college and supporters in the industry and government lobbied hard to persuade legislators to allow FIT to do this. In 1975, an amendment to the Education Law of New York State permitted FIT to offer BS and BFA programs; another in 1979 authorized master’s degrees.

By this time, six more buildings had been added to the campus, including two dormitories, and the Shirley Goodman Resource Center, which houses the Gladys Marcus Library and The Museum at FIT The school continued to grow by adding modern facilities, like the Design/Lighting Research Laboratory and the Annette Green Fragrance Foundation Studio (the first of its kind on a college campus), making international programs available to students, and evolving its academic offerings.

Today, the campus encompasses an entire city block and serves more than 10,000 students. The college offers degrees in diverse subjects, such as Menswear and Cosmetics and Fragrance Marketing, which are unique to the college, and Fashion Business Management, Visual Presentation and Exhibition Design, and Toy Design, the first of their kind in the country. 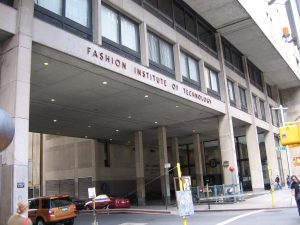 In addition to the degree programs, FIT offers a wide selection of non-credit courses through the Center for Professional Studies. One of the most popular programs is the “Sew Like a Pro” series, which teaches basic through advanced sewing skills.

FIT is an accredited institutional member of the Middle States Association of Colleges and Schools, the National Association of Schools of Art and Design, and the Council for Interior Design Accreditation. FIT publishes research on store branding and store positioning. In 1967, FIT faculty and staff won the first higher education union contract in New York State.

FIT’s academic buildings are named for individuals who have made significant contributions to the development of FIT and the industries they serve.

David Dubinsky was a labor leader who was president of the International Ladies Garment Workers Union (ILGWU) for more than 30 years. He helped create the Congress of Industrial Organizations (CIO), a federation of unions that organized workers in industrial unions, and was a founder of the American Labor Party and the Liberal Party of New York in the 1930s and 1940s.

Marvin Feldman, FIT’s longest-serving president, held the position from 1971-92. During his tenure, the college began offering bachelor’s and master’s degrees, enrollment grew to 12,000 from 5,000, and six new campus buildings were constructed, bringing the total to eight.

Fred P. Pomerantz was founder and former chairman of Leslie Fay, Inc., a leading New York producer of women’s apparel from 1974-82. He served on the Board of Directors of FIT’s Educational Foundation for the Fashion Industries from 1967-78. After his death in 1986, the building was named for him in recognition of a donation by his son, John J. Pomerantz, a former member of FIT’s Board of Trustees and foundation.

Shirley Goodman came to the college in 1949 to help draft the legislation making FIT part of the SUNY system. She was a key figure in the college’s development and served for many years as executive director of FIT’s Educational Foundation for the Fashion Industries (now the FIT Foundation), a position she held until her death in 1991.

Graduates, past students and alumni of the Fashion Institute of Technology in New York City include:

FIT’s mission is to prepare students for professional excellence in design and business through rigorous and adaptable academic programs, experiential learning, and innovative partnerships. A premier public institution in New York City, FIT fosters creativity, career focus, and a global perspective and educates its students to embrace inclusiveness, sustainability, and a sense of community. 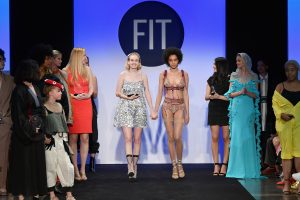 FIT aims to be globally celebrated as the institution where students, scholars, and teachers cross traditional disciplinary boundaries to stimulate innovation

FIT aims to be globally celebrated as the institution where students, scholars, and teachers cross traditional disciplinary boundaries to stimulate innovation, partner with creative industries worldwide, and develop innovative design and business solutions. By focusing on the three major goals, FIT will become stronger by conscious design and be known as a strategic organization—one that applies available resources to greatest effect to achieve its vision.

A central component of FIT’s mission, and woven throughout the college’s strategic plan, is a commitment to sustainability, diversity, and civility. One of the key goals of the FIT Strategic Plan is to create a campus that is purposefully diverse—one which, through its students, faculty and staff—reflects the pluralistic city, nation, and world in which we live.

Through the establishment of various councils, task forces, and committees, President Joyce F. Brown has provided opportunities for members of the FIT community to celebrate and honor cultural diversity, to incorporate sustainability into both operational and curricular activities, and to foster discussion of respectful ways of living and learning in a higher education environment. The groups are charged with providing support for activities and encouraging dialogue throughout the institution.