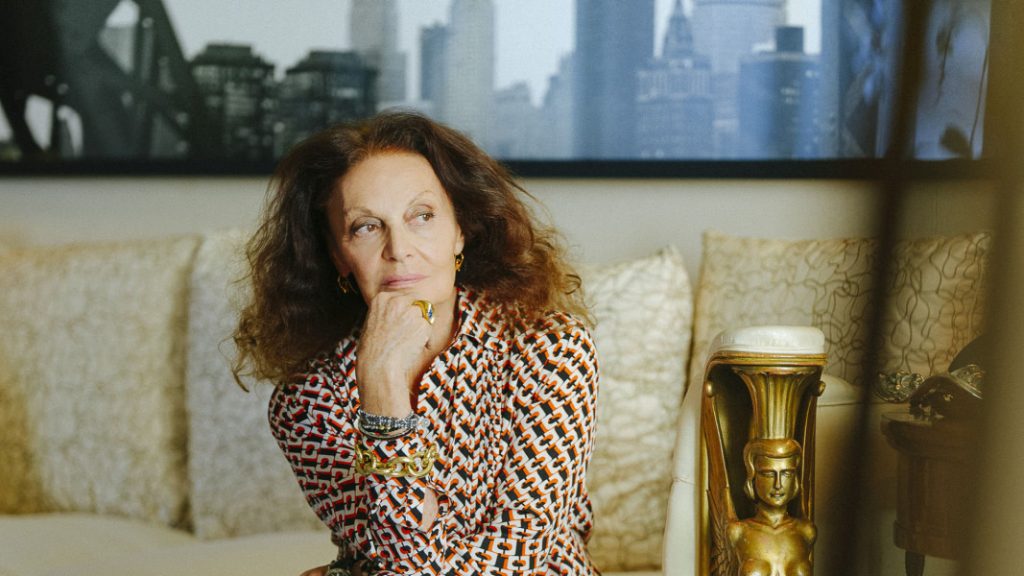 A household name in the fashion industry since the 1970’s, Diane Von Furstenburg brought to life her iconic wrap dress, the first of its kind.The dress became the defining power symbol for an influential generation of women and currently boasts a permanent position in an exhibition of dresses held in the Smithsonian Museum. More importantly, she is not only a designer, but also a princess,a mother, an author and a philanthropist.

Fürstenberg attended a boarding school in Oxfordshire.She studied at Madrid University before transferring to the University of Geneva to study economics.She then moved to Paris and worked as an assistant to fashion photographer’s agent Albert Koski.

She left Paris for Italy to apprentice to the textile manufacturer Angelo Ferretti in his factory, where she learned about cut, color and fabric. It was here that she designed and produced her first silk jersey dresses, which is in the collection of the Costume Institute of the Metropolitan Museum of Art, for its influence on women’s fashion.

She began designing clothes in 1970. Although she had no financial need to work thanks to her marriage to a German aristocrat, she has stated that she craved independence. She was selling 25,000 dresses a week and was on the cover of Newsweek in 1976.She called the wrap dress the robe-­portefeuille (wallet dress in French), and it flew out of stores, first in the 1970s and then again when she revived the design in the 1990s. She first created her now-iconic wrap dress in 1972, when she saw Julie Nixon Eisenhower on television wearing one of her wrap tops with one of her skirts – and decided to combine the two garments into one.

Von Furstenberg left the fashion industry in 1985 to start a publishing house in Paris but came back in 1997.

In 2009, Michelle Obama wore the DVF signature Chain Link print wrap dress on the official White House Christmas card. That same year, a large-scale retrospective exhibition entitled “Diane von Furstenberg: Journey of a Dress” opened at the Manezh, one of Moscow’s largest public exhibition spaces. It was curated by Andre Leon Talley and attracted a lot of media attention. In 2010, the exhibition traveled to São Paulo; and in 2011, to the Pace Gallery in Beijing.

In March 2010, London hotel Claridge’s unveiled a collaboration with Von Furstenberg which saw her design a series of the legendary hotel’s rooms and suites. In August of the same year, she promised to give away half of her fortune to the Giving Pledge – an initiative set up by Bill Gates and investor Warren Buffett to encourage America’s richest families to donate money to society’s most serious problems.

Diane met her first husband, Prince Egon zu Fürstenberg, the German elder son of Prince Tassilo zu Fürstenberg and his first wife, Clara Agnelli, an heiress to the Fiat fortune, when she was 18.They married in 1969, moved to New York, and went on to have two children – a son, Prince Alexandre von Furstenberg, and a daughter Princess Tatiana von Furstenberg – but divorced amicably three years later in 1972. In 2001, Von Furstenberg married media mogul Barry Diller. DVF now has four grandchildren.

A year after marrying, Fürstenberg began designing women’s clothes. She moved to New York where she met high-profile Vogue editor Diana Vreeland, who declared her designs “absolutely smashing”. She had her name listed on the Fashion Calendar for New York Fashion Week, and so her business was created.

She launched a cosmetic line and her first fragrance, “Tatiana”, named after her daughter. The New York Times reported that by 1979 the annual retail sales for the company were $150 million.

In 2004, she introduced the DVF by H. Stern fine jewelry collection, and launched scarves and beachwear.

In 2011, DVF introduced a home collection, and a signature fragrance, DIANE.

In March 2012, Fürstenberg launched her first childrenswear collection with GapKids and a denim collaboration with CURRENT/ELLIOTT.

She launched her first capsule line this spring 2019, called TVF for DVF—a collection of clothing with slightly lower price points than DVF and geared towards millennials.

Her brand now encompasses handbags, shoes, jewelry and accessories and is sold in over 55 countries with 148 DVF stores. She shares ownership of DVF with her husband, media billionaire Barry Diller, and her two children from her previous marriage to a German aristocrat.

Her fashion company, Diane von Furstenberg (DVF) is available in over 70 countries and 45

She’s on the board of such causes as Vital Voices, a women’s leadership ­organization, and the Shed, the  performing arts venue at Manhattan’s Hudson Yards. Fürstenberg  even served as one of the project chairs for New York City Mayor Michael Bloomberg’s review of the future of NYC’s Fashion industry, which was prepared by NYCEDC. She designed shirts for Hillary Clinton’s 2016 presidential campaign.

February 2011: She received the Award of Courage for her enduring efforts in combating AIDS by internationally renowned charity, amfAR.

April 2011: She received the Jacqueline Kennedy Onassis Medal from the Municipal Art Society of New York, in recognition of her “outstanding contribution to the built environment of New York City” – chosen for helping to redevelop the Meatpacking District, as well her work supporting the city’s High Line Park – a public space built on an elevated derelict railway track. Together with her husband Barry Diller, Von Furstenberg donated $10 million  towards the project.

2014: She was listed as the 68th most powerful woman in the world by Forbes.

2016: She was awarded an honorary doctorate from The New School.