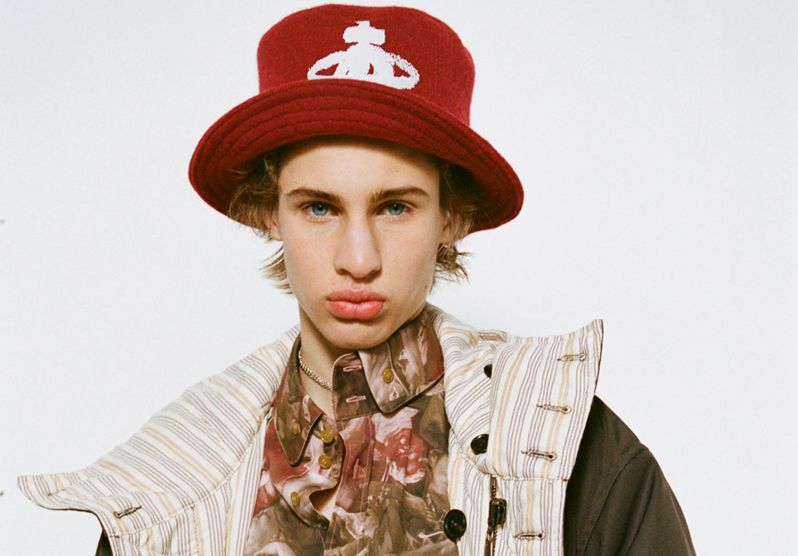 Vivienne Westwood was at the epicentre of British fashion. Known for her radical design aesthetic and shock value, some of her popular designs introducing the punk and street style into mainstream fashion and the transformation of the crinoline into a shorter silhouette. She later focused on sustainable processes that would have a reduced impact on the environment.

To make fashion more humane – and help save the planet along the way!

Born in Tintwistle, High Peak, Derbyshir, Vivienne Westwood studied at Harrow School of Art and University of Westminster, taking courses in fashion and silver-smithing, but left after one term. “I didn’t know how a working-class girl like me could possibly make a living in the art world,” she told BoF. After taking a job in a factory, then training to be an educator, she became a primary school teacher. During this period, she also created her own line of jewellery, which she sold at a stall on London’s Portobello Road. In 1962, she married Derek Westwood and gave birth to a son. The marriage ended when she met Malcolm McLaren and moved to Clapham, where their son Joseph was born. Westwood continued to teach until 1971 and McLaren designed apparel. When he became manager of punk band, Sex Pistols, the duo made headlines as the band wore their designs.

Since, Vivienne Westwood has been at the epicentre of British fashion since she began retailing her punk-inspired design in Malcom McLaren’s store, ‘Sex’, in the Seventies. The duo enjoyed shock value, designing apparel and shoes that referenced deviant sexual practices, including rubber dresses and spiked stilettos. The store that she co-managed with McLaren soon became a meeting place for members of the London punk scene. Per Vogue, ‘A provocateur, radical thinker and instigator of the most important sartorial statements of the twentieth and twenty-first centuries, Vivienne Westwood is a fearless nonconformist with a relentless passion for tradition… Her revolutionary designs include the co-creation of the punk style, the introduction of street style into high fashion, the reworking of the crinoline, the restyling of Harris tweed and the reintroduction of platforms and the hourglass figure.’ It was she who first introduced bondage trousers and other aspects of BDSM, along with safety pins and chains, to the fashion mainstream. Westwood also inspired the style of punk icons, such as Viv Albertine, who wrote in her memoir, “Vivienne and Malcolm use clothes to shock, irritate and provoke a reaction but also to inspire change. Mohair jumpers, knitted on big needles, so loosely that you can see all the way through them, T-shirts slashed and written on by hand, seams and labels on the outside, showing the construction of the piece…” Her use of Seventeenth and Eighteenth century cutting techniques, particularly the radical cutting lines she developed for men’s trousers, continue to be used today. “It changed the way people looked. I was messianic about punk, seeing if one could put a spoke in the system in some way,” she told Time. 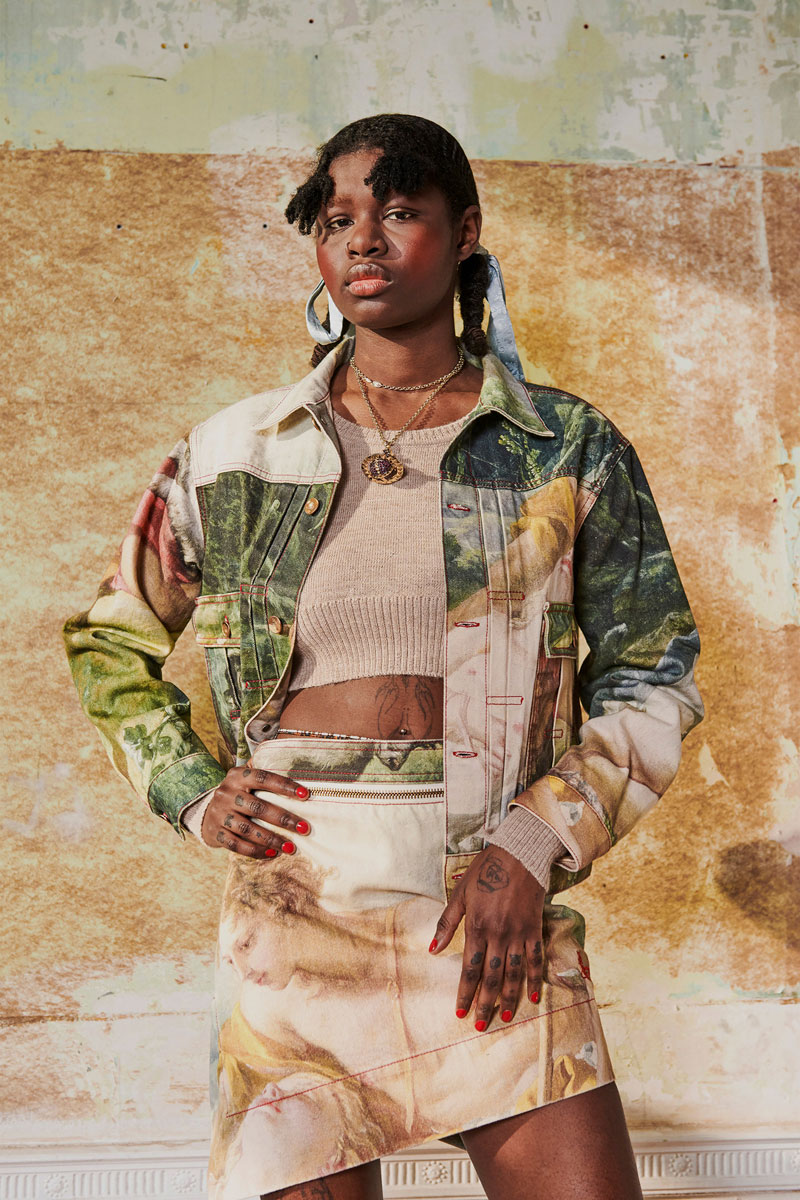 The break up of ‘Sex Pistols’ and punk’s absorption into the mainstream inspired Westwood to design ‘Pirate’ for Autumn Winter 81 which has often been described as an “age of highwaymen, dandies and buccaneers”, with wide-leg, wide-striped Bucaneer pants and shirts worn with draped sashes. Partly inspired by Westwood’s interest in portrait paintings of the Seventeenth and Eighteenth century, what became known as the ‘New Romantic’ look filtered through to the mainstream. Subsequently, the duo produced collections in Paris and London, created collections titled ‘Savage’, ‘Buffalo Girls’, ‘New Romantics’ and ‘The Pagan Years’. After the partnership with McLaren was dissolved, she often inserted her designs with slogans and political calls to action. Westwood also took inspiration from the ballet, Petrushka, and designed the mini-crini, a shorter version of the Victorian crinoline with a mini-length and bouffant silhouette. Per Vogue, “She has been described by Anna Wintour as ‘an unbelievable influence’ and by Alexander McQueen as ‘the Coco Chanel of our day’.”

Her political concerns shifted over the years; she is now an activist for climate change, nuclear disarmament and civil rights, particularly freedom of speech. ”I make the great claim for my manifesto that it penetrates to the root of the human predicament and offers the underlying solution. We have a choice to become more cultivated, and therefore more human; or by not choosing, to be the destructive and self-destroying animal, the victim of our own cleverness. To be or not to be…” she wrote in a manifesto entitled ‘Active Resistance to Propaganda.’ Westwood also worked with Richard Branson to design uniforms for Virgin Atlantic. Westwood and Branson were keen to use sustainable materials and chose recycled polyester. In 2011 Vivienne Westwood Ltd paid almost £350,000 in taxes to HM Revenue and Customs. The following year, it reached an agreement to end a UK franchise relationship with Manchester-based Hervia, which operated seven stores for the fashion chain. The deal brought to a conclusion a legal issue, which included Hervia issuing High Court proceedings for alleged breach of contract, after Westwood sought to end the deal before the agreed term. It was reported that a financial settlement was reached between the parties. In June 2013, Westwood announced she was not considering expansion and focused on environmental and sustainability issues. The following year, as part of Milan Fashion Week Spring Summer 2015, Westwood allied with nonprofit organisation ‘Farms Not Factories’ to design T-shirts and tote bags made using ethically sourced organic cotton.

In 2015, Vivienne Westwood Ltd had expanded worldwide and was operating sixty-three outlets, as she continued to design with sustainable materials that have a reduced impact on the environment. Per Vogue, on her newest Autumn Winter 2021 collection, ‘From the mini-crini and beyond, Westwood has long upcycled deadstock modes of dressing to renew them through her urgent and maverick eye. This collection’s refreshed melange… starred across prints on shirting, T-shirts, denim, bodysuits, dresses and a frock-coatish parka, competing with clashing ginghams, stripes, herringbones, and checks. Not unlike Boucher, Westwood is a master at subverting apparent propriety to invoke the truthful and unruly; her signature brushstrokes of drunken tailoring and subversive drape were in full effect here.’

So, is it a wonder then that Vivienne Westwood is the proud recipient of British Fashion Designer of the Year in 1990, 1991 and 2006?