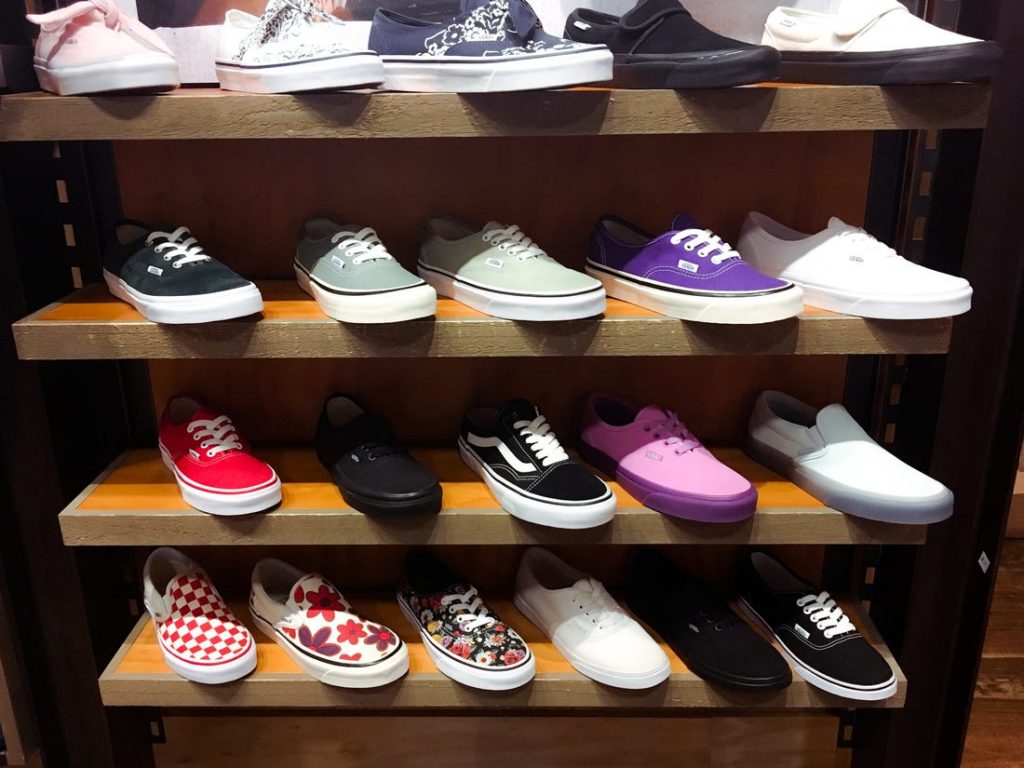 From streetstyle sightings to collaborations and celebrity lacing up their Vans, the California-based company has grown from a local favourite to a million dollar conglomerate that sponsors BMX, surfing, and snowboarding.

In 1944, Paul Van Doren dropped out of school and his mother got him a job at Randy’s, a shoe manufacturer. Doren worked his way up the ranks to Executive Vice President and Randy’s became one of the biggest shoe manufacturers in the US. Following his success in Massachusetts, Doren was instructed to turn around a factory in Garden Grove, California that was losing reportedly a million dollars each month. In just eight months, the factory was doing better than the one in Massachusetts and that’s when Doren decided he wanted to launch his own shoe brand.

In1966, the brothers and partner Gordon C. Lee opened the first store of Vans [originally named Van Doren Rubber Company] in Anaheim, California. On opening day, there were just display models and twelve people ordered deck shoes, which were made that day itself. The brand was distinctive as it manufactured and sold shoes on its premises. Observing his son’s interest in skateboarding, James began manufacturing skateboarding shoes. ‘Vans 95′, with padded collar and multiple color combinations, were laced up by skateboarders in no time. In the late Seventies Vans launched “The Old Skool” skate shoe with leather panels for durability. In 1978, the brand introduced “Style 38,” which protected skateboarders’ ankle. In 1979 Vans introduced slip-on shoes which were a rage in southern California. It was also the decade that introduced Vans logo which began as a doodle by Paul Van Doren and referred to as “jazz stripe”. During this time, Vans expanded to seventy stores in California and sold through dealers.

In the Eighties, “Vans Slip-Ons” caught everyone’s attention when worn by actor Sean Penn in “Fast Times At Ridgemont High”. Sadly, the company could not sustain itself and filed for Chapter 11 bankruptcy protection. Although the core shoes were selling well, the broad range of products had drained funds. Courts approved the re-organization and President Paul Van Doren instructed employees to cut back on everything except shoe quality. In three years, Vans cleared the debt of $12 million. In 1988 Paul Van Doren agreed to sell Vans for reported $74.4 million to McCown De Leeuw and Co. Paul was now Chairman and his partner, Gordy Lee, was vice-chairman. Richard Leeuwenberg was brought in to be President. One year later Vans, Inc. made its public offering at Nasdaq.

The brand introduced “Vans Snowboard Boot” in 1994. In the nineties, it embarked on an aggressive marketing plan. It bought a controlling interest in Warped Tour, a rock tour throughout the US. In 1996, Vans collaborated with Supreme to launch a series of co-branded Old Skools. In 1997, the brand purchased Triple Crown Of Surfing a Hawaiian specialty series of professional surfing events. The following year, Vans opened a 46,000 sq ft skatepark at Orange County.

In 2000, Forbes recognised Vans as one of ‘America’s best small companies.’ The following year Vans assisted with the production of “Dogtown and Z-Boys” and Stacy Peralta’s look while skateboarding. it was a good marketing move. The film won Audience Award and Best Director Award at Sundance Film Festival. The decade also witnessed the launch of Vault By Vans, footwear melding the worlds of high-fashion and Vans’ classic silhouettes. In June 2004, VF Corporation purchased Vans for reported $396 million. The brand continues to forge collaborative efforts through “Vault by Vans” with sneaker made in alliance with designers including Marc Jacobs. In a few years, Vans released Vans x The Simpsons.

In 2010, schools in the US participated in Vans Custom Culture, a high school shoe customisation contest which culminated in four schools traveling to Vans’ home turf for a weekend of activities including the final showcase at Orange County Museum of Art. Winning school Rio Rancho High School of New Mexico received a $10,000 grant. That year, Vans reached reported $1 billion in annual sales, the first company rooted in skateboarding to achieve this feat. Vans continues collaborations to strengthen its image… with Metallica, The Beatles, Disney and athletes Pat Moore, Steve Caballero, Geoff Rowley, Nathan Fletcher and Tony Trujillo. In a milestone moment for the brand, Vans and Karl Lagerfeld launched the coveted Vans x Karl Lagerfeld capsule collection.

Our purpose to enable creative expression and inspire youth culture is fostered through our inclusivity.

To enable creative expression—and inspire youth culture—by celebrating and encouraging the Off the Wall attitude that comes from expressing your true self.