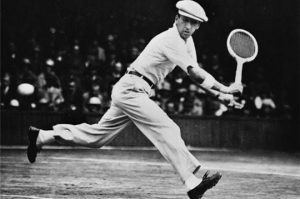 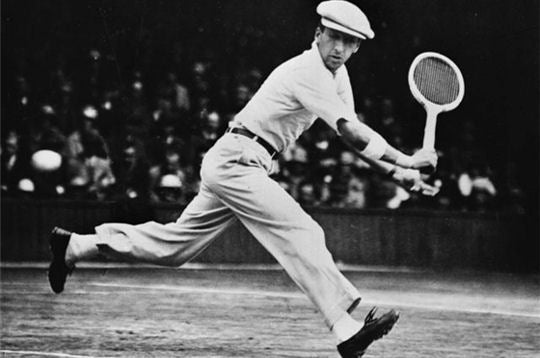 Jean René Lacoste (1904–1996) was renowned worldwide for his achievements in two different fields. Not only did he design a tennis shirt that became the cornerstone of an iconic sportswear brand, he was ranked the world’s top tennis player. Lacoste ruled the courts in the Roaring Twenties, racking up seven Grand Slam titles at the French, American and British championships and won Davis Cup twice. During a trip to Boston with the Davis Cup team in 1923, he admired a crocodile- skin suitcase in a store window and coach Alan Muhr promised to gift it to him if he won the match; this anecdote, captured by a journalist from Boston Evening Transcript, led to his nickname “le Crocodile” and inspired his brand’s reptilian logo.

Scion of affluent Parisian couple Jeanne-Marie Magdeleine Larrieu Let and Jean-Jules Lacoste, Jean René Lacoste played his first game of tennis at fifteen. The Tennis Hall of Fame cited that it was his ambition, discipline and cerebral strategies that transformed him from an amateur player into a champion. Few know, though, that it was his father’s ultimatum that spurred him to victory — Jean-Jules Lacoste agreed to encourage René in his chosen career if he became world champion in five years; since then he spent as much analysing opponents’ strengths and weaknesses, as practicing on court, and became the world’s top tennis player.

In 1924, Lacoste reached his first final at Wimbledon, losing to Jean Borotra, but won the title the following year in a rematch. He also won the singles title at the French Championships. The following year, he won the U.S. National Championships title. In 1927, Lacoste was part of the French team that won Davis Cup and defended his title at the U.S. National Championships. For the second successive year he was ranked No. 1. In 1928 Lacoste beat Cochet in the final of the Wimbledon Championships. The only major championship he played in 1929 was the French and he won his seventh, and last, Grand Slam singles title after a five-set final against Borotra. Failing health led to his withdrawal from competitive tennis though he was non-playing captain of the French Davis Cup team in 1932 and 1933. The Four Musketeers were inducted into the International Tennis Hall of Fame, in Newport, Rhode Island in 1976.

When a friend Robert George drew a crocodile for him, Lacoste had it embroidered on the blazer he sported on the court. La Chemise Lacoste,was launched five years later, in 1933, when he requested André Gillier, president of the largest French knitwear company at the time, to produce and sell crocodile-emblazoned shirts. The sportswear brand was revolutionary — instead of the white long-sleeved button-down tennis shirt that was the norm, Lacoste introduced coloured cuffed-sleeve, cotton shirts with his signature crocodile; reportedly the first designer logo in fashion history. His son, Bernard Lacoste, took over the reins in 1964.

In 1961, Lacoste was praised for his innovation in racket technology when he unveiled and patented a split-shaft steel tennis racket. In those days, wood rackets were the norm. This racket was stiffer and allowed greater force to the ball. It was marketed in Europe under the Lacoste brand and in the United States by Wilson Sporting Goods. Pierre Darmon debuted the racket at Wimbledon in 1963, but it achieved cult status as Wilson T-2000, favoured by American tennis icons Billie Jean King and Jimmy Connors.

‘Save Our Species’ marks a three-year collaboration between Lacoste and International Union for Conservation of Nature; profits from the brand’s limited edition collection of white polo shirts  — where the iconic crocodile logo was replaced with ten endangered wildlife — went towards helping IUCN’s efforts to conserve endangered wildlife.