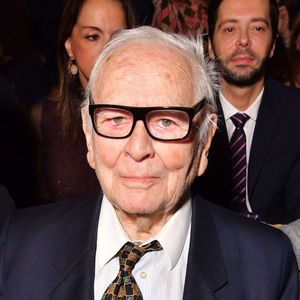 Pierre Cardin born on 2 July 1922, is an Italian, neutralized French fashion designer. He is known for his avant-garde style and his Space Age designs. He prefers geometric shapes and motifs, often ignoring the female form. He advanced into unisex fashion, sometimes experimental, and not always practical. He founded his fashion house in 1950 and introduced the “bubble dress” in 1954.

Pietro Costante Cardin was born in Sant’Andrea di Barbarana, part of the Treviso municipality of San Biagio di Callalta, as a child of wealthy farmers who ended up in poverty after the First World War.

It was precisely poverty that led Peter’s parents to move to France in 1924.

In 1936 the fourteen-year-old Pietro (whose name had already been changed to Pierre) began his apprenticeship with a tailor in Saint-Etienne; after a brief experience with Manby, a tailor in Vichy, in 1945 he came to Paris working first with Jeanne Paquin and then with Elsa Schiaparelli. The first tailor of the Christian Dior maison during its opening in 1947 (after being rejected by Cristóbal Balenciaga), he participated in the success of the master who defined the New Look. In 1950 he founded his fashion house, then experimenting with high fashion in 1953. Cardin is known for his avant-garde style inspired by the space age. He prefers geometric shapes and patterns often ignoring the feminine forms. He progressed in unisex fashion, sometimes experimental and not always practical. In 1954 he introduced the “bubble dress”, the bubble dress.

In 1959 Cardin was the first designer to open a high fashion store in Japan. Also in that year he was expelled from the Chambre Syndicale, the Syndical Chamber, for having first launched a collection in Paris for the Printemps department store, but was soon reinstated. However, he resigned from the Chambre Syndicale in 1966 and since then shows his collections in his home, the Espace Cardin, opened in 1971 in Paris and before then in the “Ambassador’s Theater”, near the American Embassy. The Espace Cardin is also used to promote new artistic talents, such as actors or musicians.

In 1971 he was joined in the creation of clothes by his colleague Andrè Oliver: in 1987 he assumed responsibility for high fashion collections, until his death in 1993.

Cardin was a member of the Chambre Syndicale de la Haute Couture et du Prêt-à-Porter and the Maison du Haute Couture from 1953 to 1993.

Like many other designers today, Cardin decided in 1994 to show his collection only to a select group of selected clients and journalists.

In 1981 he bought Maxim’s restaurants and in a short time he opened branches in New York, London and Beijing in 1983. He also owns the Maxim’s Hotel chain. Cardin has also patented a wide range of food products under that name.

Pierre Cardin owns the ruins of a castle in Lacoste that had previously been occupied by the Marquis de Sade. After partially renovating the site, he regularly organizes theater festivals. He also owns the Palazzo Ca ‘Bragadin in Venice where he lives during his frequent stays in the lagoon city (in the adjacent street there is an exhibition space).

In the 1980s, Pierre Cardin bought the Palais Bulles (The Palace of the Bubbles), designed by the eccentric architect Lovag Antti. Everything, from floor to ceiling, from outside to inside, is filled and drawn by spherical shapes. With its 500-seat theater, the pools overlooking the Mediterranean Sea is often a place for parties and cultural and artistic initiatives. The interior is furnished with pieces of design of incredible artistic value, the Sculptures designed by the same designer, who since 1977 has created a collection of elegant furniture with sinuous forms. In the Gulf of Cannes, in Théoule-sur-Mer, south of France, this architectural work in 1988 was designated by the Ministry of Culture as a historical monument.

Among the products of the Maxim’s line by Pierre Cardin there is also mineral water that is taken and bottled in the locality of Graviserri in the municipality of Pratovecchio Stia, province of Arezzo.

Pierre Cardin designed the uniforms of the People’s Liberation Army of the PRC in 1988.