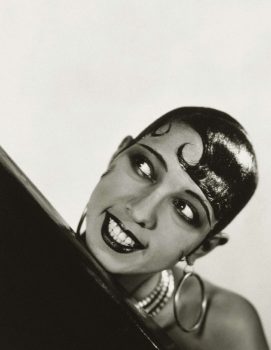 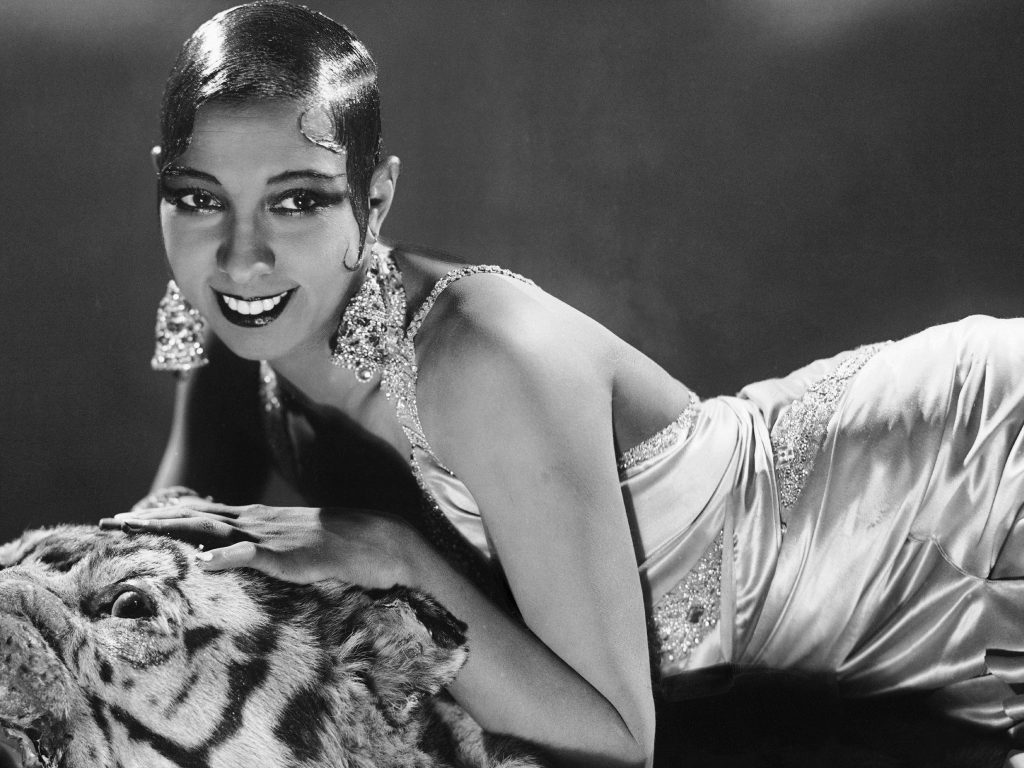 African-American cabaret dancer Josephine Baker [1906-1975] electrified audiences at her famed show Danse Sauvage — in a string of pearls and skirt made of rubber bananas — and quickly became one of Europe’s most sought-after highest-paid performers. Touring worldwide, she declined performing for segregated audiences in the United States and is acclaimed for her contribution to the Civil Rights Movement. Stardom made her the perfect spy during World War II; Baker rose to the rank of lieutenant in The Free French Air Force and was the only American woman to be awarded Croix de Guerre and Legion of Honour with Resistance Medal — France’s highest military honours.

Freda Josephine McDonald was born on 3 June 1906 in St Louis, Missouri to a family of performers; her mother Carrie McDonald was famous for her ability to dance on a chalk-line with a glass of water balanced on her head while her father Eddie Carson was a vaudeville drummer, both often bringing her onstage during their shows. She was further exposed to show business in her teenage years because her neighbourhood was home to vaudeville theatres that doubled as cinema halls. Sadly, her parents careers didn’t take off, forcing the young girl to make a living with street performance where she caught the attention of an African American theatre troupe and at fifteen, left home with them.

In 1919, Josephine shifted base to New York City to perform in Broadway revues as chorus girl and was also a significant part of the celebration of black life and art, now known as Harlem Renaissance. Shortly, she was recruited to an all-black dance troupe heading to Paris and by 1925, was performing in La Revue Nègre and opened her own nightclub, Chez Josephine. In 1921 she married Willie Baker and bagged a role in the musical ‘Shuffle Along’. Buoyed by success, Baker moved to New York and was soon performing at Plantation Club, Shuffle Along with Adelaide Hall and The Chocolate Dandies.

In 1925, Baker was one of the few coloured Americans to sail to Paris, where she performed at La Revue Nègre — a musical show that emerged due to France’s fascination with jazz — and introduced her danse sauvage, electrifying French audiences with sensuous moves in just a pearl necklace and a skirt made of rubber bananas. Her erotic performance was wildly popular with Parisian audiences and she was soon among the highest-paid, most sought-after performers in France, earning the respect of cultural icons Pablo Picasso, Ernest Hemingway and E. E. Cummings and pinned with nicknames like Black Venus and Black Pearl. In her act at Casino de Paris she was accompanied onstage by a pet cheetah wearing a diamond collar; a gift from the club’s owner. It often escaped to the orchestra pit, frightening musicians and adding a frisson of excitement to the show!! The money from her performances allowed Baker to buy an estate in the southwest of France, and she moved her family there from St. Louis. Baker also starred in three films: Siren Of The Tropics; Zou-Zou and Princesse Tam Tam. During this time, she bagged her most popular song, “J’ai deux amours”. In 1934, she was lead in a revival of Jacques Offenbach’s opera La créole at Théâtre Marigny on Champs-Élysées. Despite her popularity in France, Baker returned to the United States to perform in Ziegfield Follies. However, she was met with an antagonistic racist reaction and returned heartbroken to France, where she married French industrialist Jean Lion and obtained citizenship.

When the Hitler and the German army invaded France during World War II, Josephine Baker joined the fight against the Nazi regime. She worked for the Red Cross and gathered intelligence for the French Resistance. Her performances provided her with the perfect opportunity to travel across Europe, and as a glamorous star she was invited to embassy gatherings. Here, she would eavesdrop and flirt with high-ranking officials to gather intel about German troop locations and airfields. She also smuggled secret messages written in invisible ink on her sheet music and pinned photographs of German military installations to her underwear, confident that her fame would not require a strip search. In 1941, Baker and her entourage travelled to the French colonies in north Africa to make Spanish Moroccan passports available to eastern European Jews in order to help them escape to South America. For all of these efforts, she rose to the rank of lieutenant in the Free French Air Force, and when the war was over, she was the only American woman to be awarded Croix de Guerre and Legion of Honour with Resistance Medal — France’s highest military honours. De Gaulle also presented her with the gold Croix de Lorraine—which she later sold to raise money for the Resistance.

In 1947, Baker married her fourth husband, French orchestra leader Jo Bouillon, and bought a Renaissance castle in Périgord. Now, while in Europe and North Africa, she was welcome everywhere but at home Baker was discriminated against simply because she was black. She found this inhuman, and in 1951 toured the United States, to fight segregation. There was a clause in her contracts that the venues she performed at had to allow all ticket holders, regardless of colour. When she arrived in New York with her husband, they were refused reservations at thirty-six hotels because she was African-American. This experience was repeated across the country, including Las Vegas. When Vegas club El Rancho refused to let black ticket holders into her concert, Baker declined to perform until the owners relented. Her American tour climaxed with a parade in front of a million people in Harlem to honour the title bestowed on her — ‘National Association for the Advancement of Colored People‘s Woman of the Year.’ Baker also wrote on discrimination and injustice she had experienced for French paper, France Soir, and gave talks about US segregation. On 28 August 1963, she was the only woman speaking alongside Martin Luther King at The March On Washington — to draw attention to the challenges and inequalities faced by African Americans a century after emancipation. Her actions did not go down well with the FBI, who opened a file against her, because of her anti-United States statements and her fight for racial equality, and recorded her actions for fifteen years.

In 1953, to demonstrate that racial harmony was possible, Josephine Baker adopted twelve children of different ethnic backgrounds from around the world. The multi-racial family, known as The Rainbow Tribe, lived together in Château des Milandes, France. To throw light on her utopian ethnic narrative, she invited the press to interview them and charged admission to people who wished to tour their chateau or to watch the kids play.