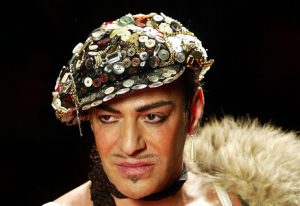 One of Fashion’s most creative designers, John Galliano is best described as ‘enfant terrible’ — bold, rebellious and controversial. He served as head designer of Givenchy, Christian Dior and his own label John Galliano — before a French court found him guilty of anti-Semitism and he went on a downward spiral after subsequent suspension from Dior in 2011. Reinstating himself with rehabilitation and the support of loyal friends, Galliano joined Maison Margiela in 2014, taking over its menswear, womenswear and accessories and creating its couture collection.

Galliano was born in Gibraltar on November 28, 1960 to a Roman Catholic family; his father was a plumber and his mother, a flamenco dancer; at six, he moved with his parents and two sisters to England. The young boy and his sisters, were always dressed immaculately; Galliano’s mother instilled in him a bold fashion sensibility, and after attending St Anthony’s School and Wilson’s Grammar School in London, he graduated with a first class honours degree in Fashion Design from Saint Martin’s School of Art. His graduating collection, ‘Les Incroyables’, inspired by the French Revolution, was bought in its entirety by London’s fashion boutique Browns and pop star Diana Ross became his first customer when she bought a coat! After gaining experience as an assistant to Savile Row tailor Tommy Nutter, suit maker to Mick Jagger, the Beatles and Elton John, Galliano unveiled his own label and began working with long-term alliance Amanda Harlech, a fashion editor for Harpers And Queen; and Stephen Jones, a milliner. His collections were both dramatic and wearable — steeped in history, art, culture and a vivid imagination — but by 1990 he went bankrupt as he had no business acumen to complement his creativity.

When he failed to revive business, Galliano relocated to Paris. Coming to his rescue, American Vogue editor-in-chief Anna Wintour flew him to New York to meet banker John Bult, and Andre Leon Talley, then European correspondent of Vanity Fair, introduced him to fashion patron Sao Schlumberger. Together, they helped him with investment and a seal of approval, crucial to success. Schlumberger hosted his show at her mansion and Galliano designed the entire collection from a single bolt of fabric, using both the matte and shimmering sides. Models came out in jackets that morphed into mini kimonos with floral obi sashes! It received rave reviews and was a milestone in the development of the label. In 1995, Bernard Arnault, owner of luxury goods conglomerate LVMH, appointed Galliano as Head Designer of Givenchy — he became the first British designer to head a French haute couture house. The following year Galliano presented his first couture show at the helm of Givenchy; it was a hit. In 1996, LVMH moved him to Christian Dior, replacing Gianfranco Ferré. His immersion into the collection narratives was absolute and his travels to India, China, Japan, Turkey, Egypt, Middle Europe and France served as inspiration for some of the most arresting shows in Fashion. The bias cut, the bar jacket, the Nefertiti couture, the saddlebag — under Galliano, Dior dominated Fashion owing to his spectacular shows inspired by history and his own travels. In 1997, CFDA named him International Designer Of The Year. He was also named British Designer Of The Year at British Fashion Awards in 1987, 1994, 1995, 1997.

Galliano hurled racist and anti-Semitic abuse at Géraldine Bloch and Philippe Virgiti, at Café La Perle, Paris and just before Paris Fashion Week Autumn Winter 2011-12, a video clip of another fracas stunned millions of people with its anti-Semitism and obscenity.First posted on the website of British tabloid The Sun, it went viral and brewed an ugly controversy. Galliano pleaded he was suffering from barbiturate poisoning — the consequence of a combination of painkillers, Valium, sleeping pills and red wine, and a toxicologist testified that the medication and liquor could have driven him out of his mind. But the damage was done. On 1 March 2011, Dior announced it had begun procedures to dismiss Galliano but would financially support the Galliano brand which is 91 per cent owned by Christian Dior SA. The dismissal of a couturier who had left a mark on Dior — and on the history of fashion — left the fashion fraternity shocked and saddened. Subsequently Bill Gaytten replaced John Galliano as Creative Director at Dior and John Galliano. On 8 September 2011, he was sentenced to pay €6,000 in suspended fines after a French court found him guilty of voicing public insults on account of race. Soon after, Galliano admitted himself into The Meadows rehabilitation facility in Arizona, to address his addiction issues.

In 2013, Galliano accepted an invitation from Oscar de la Renta, facilitated by Anna Wintour, to work in his New York design studio while de la Renta prepared his ready-to-wear collection for New York Fashion Week. It was an invaluable opportunity to reinstate himself in Fashion. On 6 October 2014, Galliano joined Maison Margiela as Creative Director and reorganised the fashion house into a pyramidical structure he had mastered in his rich journey — a lavish couture collection that sets the tone for the ready-to-wear, the accessories, the bags, the footwear. With him at the creative helm, revenues have doubled, according to the brand, with accessories forming 60 per cent of the brand’s profits.

Galliano had a relationship with Central St Martins student and fashion designer John Flett, who passed away due to a heart attack, in his twenties. He is now in a live- in relationship with long- term partner, style consultant Alexis Roche.

2001: Commander of British Empire award from Queen Elizabeth for his contribution to fashion

2002: RDI for his contribution to the fashion

2009: French Legion of Honour. The medal was reportedly withdrawn by decree of the president of the Republic, François Hollande