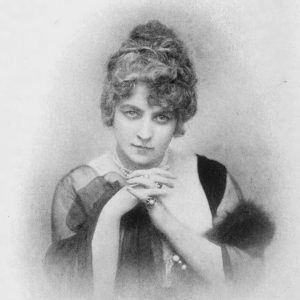 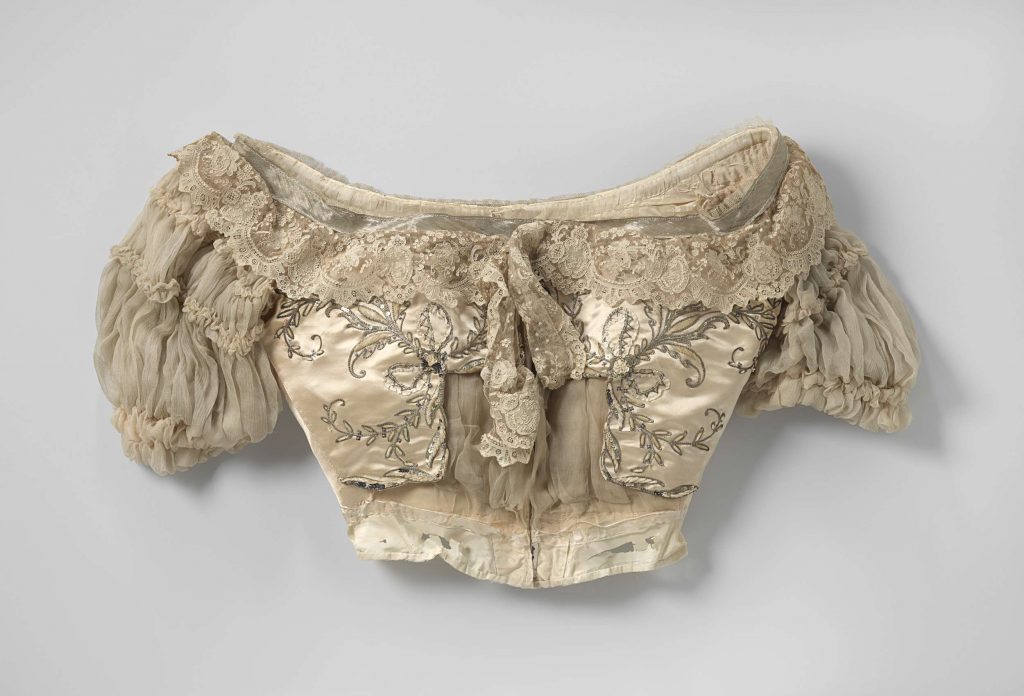 Jeanne Paquin was the first major female couturier and one of the pioneers of the modern fashion business. In 1913, a New York Times reporter described Jeanne as “the most commercial artist alive”. Many of her gowns were a blend of drapery and tailoring, suitable for the more active woman of the 20th century.She was noted for her romantic gowns and fine workmanship.

Jeanne Paquin (Jeanne Marie Charlotte Beckers) was born in Saint Denis, France in 1869. Her father was a physician.She was one of five children.

Sent out to work as a young teenager, Jeanne trained as a dressmaker at Rouff (a Paris couture house established in 1884 and located on Boulevard Haussmann). She quickly rose through to ranks becoming première, in charge of the atelier.

In 1891, Jeanne Marie Charlotte Beckers married Isidore René Jacob, who was also known as Paquin. Isidore Paquin died in 1907 at the age of 45, leaving Jeanne a widow at 38.

In 1936 Madame Paquin died, but her house remained open.

Isidore owned Paquin Lalanne et cie, a couture house which had grown out of a menswear shop in the 1840s. The couple renamed the company Paquin and set about building the business. In 1891, Jeanne and Isidore Paquin opened their Maison de Couture at 3 Rue de la Paix in Paris, next to the celebrated House of Worth.  Madame Jeanne was the designer and her husband ran the business and administration. In 1896, they opened a couture house in London which employed a young Madeleine Vionnet. The business became a limited company the same year. This shop The company later expanded with shops in Buenos Aires, Madrid and a special shop for furs in New York.

In 1900 Madame Paquin was chosen to organize the fashion segment of the Exposition Universelle, held in Paris and she was elected president of the Fashion Section. Her designs were featured prominently at the Exhibition and Jeanne created a mannequin of herself for display. In 1910, Jeanne Paquin was the first couturier to send models dressed in her apparel to public events such operas and horse races for publicity.. She also sent 12 girls to tour the major cities of America.

In 1911 Madame Paquin produced an album of accessories, fans, and clothing made by the fashion artists George Barbier and Paul Iribe. She also used designs of Leon Bakst and Drian, when designing her clothes. In 1912, Jeanne and her half-brother opened a furrier, Paquin-Joire, on Fifth Avenue in New York City.The same year, Jeanne signed an exclusive illustration contract with La Gazette du Bon Ton. La Gazette du Bon Ton featured six other leading Paris designers of the day – Louise Chéruit, Georges Doeuillet, Jacques Doucet, Paul Poiret, Redfern & Sons, and the House of Worth.In 1913 Jeanne Paquin was the first women in her field to be awarded the Legion d’Honneur.

A year later, Jeanne toured the United States to show The House of Paquin’s latest designs for five dollars. During World War I, Jeanne served as president of the Chambre Syndicale de la Couture.She was the first woman to serve as president of an employers syndicate in France.

When Jeanne Paquin retired in 1920, she passed responsibility to her assistant Madeleine Wallis. Wallis remained as house designer for Paquin until 1936, the same year that Jeanne Paquin died. Between 1936 and 1946, the Spanish designer Ana de Pombo, Wallis’s assistant, was house designer. From 1941, Antonio Castillo was the head designer at the house of Paquin, and brought his elegant Spanish style to the collections he did for Paquin. In 1945 del Castillo left Paquin to become a designer for Elizabeth Arden, and would later become head designer for the house of Lanvin.

He was succeeded by Colette Massignac, who was tasked with the challenge of keeping Paquin going during the post-War years, when new designers such as Christian Dior were receiving greater publicity and attention. In 1949, the Basque designer Lou Claverie became head designer at Paquin, until 1953, when he was succeeded by a young American designer, Alan Graham.That same year, the house of Paquin merged with the House of Worth, but that house also closed in 1956.From December 1989 till March 1990, an Exhibition of creations from the house of Paquin, was held in Paris which enabled a new generation to see her wonderful gowns.