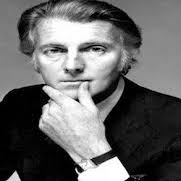 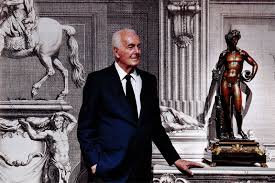 Hubert James Marcel Taffin de Givenchy, (20 February 1927 – 10 March 2018) was a French fashion designer who founded the house of Givenchy in 1952. He was famous for having designed much of the personal and professional wardrobe of Audrey Hepburn and clothing for Jacqueline Bouvier Kennedy. He was named to the International Best Dressed List Hall of Fame in 1970. His partner was Philippe Venet.

In 1944, Givenchy moved to Paris, where he studied art at the École Nationale Supérieure des Beaux-Arts. Though he considered a career in law, he decided to enter the world of fashion. At the age of 17, Givenchy began an apprenticeship with designer Jacques Fath. After his time with Fath, Givenchy worked for famous French couture houses like Lucien Lelong, Robert Piguet and Elsa Schiaparelli.

After selling his business to the luxury conglomerate Louis Vuitton Moët Hennessey in 1988, Givenchy designed for seven more years, retiring and presenting his final collection in 1995. He was succeeded as head designer by enfant terrible John Galliano, with Alexander McQueen and Riccardo Tisci later serving as head designers.

In his later years, Givenchy lived at a country estate called Le Jonchet in the French countryside. His work was displayed in retrospective exhibitions at the Fashion Institute of Technology in New York and the Musée Galliera in Paris, and he received a Lifetime Achievement Award from the Council of Fashion Designers of America in 1996.

Givenchy is a French luxury fashion and perfume house. It hosts the brand of haute couture clothing, accessories and Parfums Givenchy, perfumes and cosmetics. The house of Givenchy was founded in 1952 by designer Hubert de Givenchy and is a member of Chambre Syndicale de la Haute Couture et du Pret-a-Porter. It is owned by luxury conglomerate LVMH. Its current artistic director is Clare Waight Keller, who is the first woman to hold that position.

Givenchy achieved critical acclaim with Vogue magazine praising his “wonderful first collection”14. The collection included the Bettina Blouse a white shirt named in honour of Bettina Graziani, which was then painted in one of René Gruau’s works.

In terms of innovation, he used ‘shirting’, a raw cotton similar to pattern paper, to create his chic and casual collections.

In 1954, Hubert de Givenchy presented the first shirt dress (which later evolved into a sack dress in 1957). He was the first high fashion designer to create a luxury ready-to-wear clothing line, called “Givenchy Université”, which was produced in Paris using machinery imported from the United States. Before he was able to sign for this new collection, Hubert de Givenchy bought all the shares of his fashion house back from Louis Fontaine.