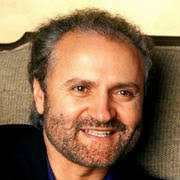 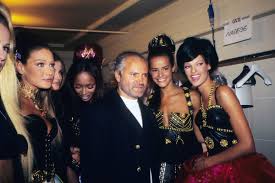 Giovanni Maria Versace was an Italian fashion designer and founder of Versace, an international fashion house that produces accessories, fragrances, make-up, home furnishings, and clothes. He also designed costumes for theatre and films. As a friend of Eric Clapton; Diana, Princess of Wales; Naomi Campbell; Duran Duran; Kate Moss; Madonna; Elton John; Cher; Sting; Tupac; The Notorious B.I.G.; and many other celebrities, he was one of the first designers to link fashion to the music world.

On 15 July 1997, Versace was shot and killed outside his Miami Beach mansion, Casa Casuarina, at the age of 50.

Giovanni Maria Versace was born on December 2, 1946 in the city of Reggio Calabria, Italy, and grew up with his elder brother Santo Versace and younger sister Donatella Versace, along with their father and dressmaker mother, Francesca. Gianni’s older sister, Tina, died at age 12 because of an improperly treated tetanus infection.

Versace was strongly influenced by ancient Greek history, which dominates the historical landscape of his birthplace. He attended Liceo Classico Tommaso Campanella, where he studied Latin and ancient Greek, without completing the course. He was also influenced by Andy Warhol.

Versace began his apprenticeship at a young age, at his mother’s sewing business, which employed up to a dozen seamstresses. He became interested in architecture before moving to Milan, Italy at the age of 26 to work in fashion design.

Versace met his partner D’Amico, a model, in 1982. Their relationship lasted until Versace’s murder. Before his death, Versace was diagnosed with cancer of the ear. Versace was known for doting on his nieces and nephews: Santo’s two children, Francesca and Antonio, and Donatella’s two children, Allegra and Daniel.

On 15 July 1997, Versace was shot in the cheek and head execution-style with a .40 caliber Taurus PT100 on the steps of his Miami Beach mansion as he returned from a morning walk on Ocean Drive. He was subsequently pronounced dead at Jackson Memorial Hospital, at 9:21 a.m. He was 50 years old at the time of his death. Usually, Versace would have an assistant walk from his home to the coffee shop to get his morning papers, but on this occasion, he decided to go in person.

Versace was murdered by Andrew Cunanan, a spree killer who had earlier murdered four other men (including Lee Miglin). Versace’s body was cremated and his ashes returned to the family’s estate near Cernobbio, Italy, and buried in the family vault at Moltrasio cemetery near Lake Como. Versace’s funeral liturgy, held at Milan Cathedral, was attended by over 2,000 people, including Diana, Princess of Wales, who was killed in a car accident just over a month later.

In September 1997, the media announced that Versace’s brother, Santo, would serve as the new CEO of Gianni Versace S.p.A. while Versace’s sister, Donatella, had become the new head of design.

In his will, Versace left 50% of his fashion empire to his niece, Allegra Versace. She and her younger brother, Daniel, inherited Versace’s rare artwork collection. Allegra inherited her stake, worth approximately $500 million when she turned 18 years old in 2004.

After opening his Milan boutique in 1972, Versace quickly became a sensation on the international fashion scene. His designs employed vivid colors, bold prints, and sexy cuts, which were a refreshing contrast to the prevailing taste for muted colors and simplicity.

From 1978, Versace built the company with the support of his family, employing his sister Donatella as Vice President and his brother Santo as President of the company. Donatella’s purview extended to creative oversight, where she acted as a key consultant to Versace. Gianni would also come to employ Donatella’s husband, Paul Beck, as menswear director.

Among Versace’s most famous innovations was his 1982 invention of a type of super-light chainmail called ‘Oroton’, which became a signature material in his outfits. His suits were inspired more by his experience in female tailoring, departing from masculine Savile Row models by crafting suits that accentuated the male form.

Versace was very proud of his southern Italian heritage and infused his designs with motifs inspired by historical fashion and art movements, especially Graeco-Roman art. This is evident in the company’s logo, the Medusa Head, and recurring motifs like the Greek key. He also allowed his love for contemporary art to inspire his work, creating graphic prints based on the art of Roy Lichtenstein and Andy Warhol.

In 1982, Versace expanded the business into jewelry and housewares, designing luxury furnishings, china, and textiles for the home. He was unusual in retaining complete creative control over all aspects of his company. In 1989, the firm expanded into haute couture with the launch of Atelier Versace. Versace became known for employing celebrities in his marketing campaigns and seating them in the front rows of his fashion shows, the first to do so. He is also credited with inventing the supermodel vogue of the 1990s, by discovering and featuring major supermodels like Naomi Campbell, Christy Turlington, and Linda Evangelista, all of whom he featured both on the runway and in his ad campaigns.