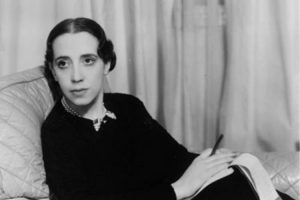 Favoured by Duchess of Windsor Wallis Simpson, Marlene Dietrich, Katharine Hepburn, Greta Garbo and Mae West, Elsa Schiaparelli is acclaimed as one of the most influential fashion designers between the World Wars. Beginning with knitwear, Schiaparelli commandeered the talent of Surrealists Salvador Dalí and Jean Cocteau in her haute couture label, and her collections are indicative of a new wave of feminism.

Born in the Corsini palace in Rome, Elsa Luisa Maria Schiaparelli’s mother, Maria-Luisa, was a Neapolitan aristocrat and her father, Celestino Schiaparelli, was a professor of Oriental literature,  Dean of the University of Rome, where she later studied philosophy. When she penned overtly sensual poems, her parents were alarmed and sent her to a boarding school in Switzerland. However, she rebelled against authority and was sent home. To avoid the pressure to wed a Russian aristocrat, when a friend offered her a post caring for orphaned children in an English country home, she took the opportunity to leave. The placement however, was unpleasant, and she fled to Paris instead of returning home.

In London, Schiaparelli attended a lecture on theosophy by Polish-Swiss Willem de Wendt, who claimed to have psychic powers and passed himself off as a detective, criminal psychologist, doctor and lecturer. The duo got engaged the next day and married in 1914! Surviving on an allowance by Schiaparelli’s parents, she helped facilitate his fraudulent schemes, and he was deported following a conviction for practicing fortune-telling. The couple lived a nomad existence in Paris, Cannes, Nice and Monte Carlo, before settling in New York. De Kerlor, however, came under the surveillance of the FBI on suspicion of harbouring anti-British and pro-German allegiance during wartime. To avoid scrutiny, they decamped to Boston in 1918. After their child, Maria Luisa Yvonne Radha, was born, de Kerlor left Schiaparelli and they divorced in 1924 and she worked at odd jobs to support herself until relocating to Paris in 1922. In 1928, she got the news he was murdered in Mexico.

During her voyage to America, a meeting with Gabrielle Picabia, wife of Dadaist painter Francis Picabia, developed into a friendship that led to Schiaparelli’s involvement with the Surrealist art movement, and, later, an acquaintance with fashion designer Paul Poiret. Writing and gold sculpting, she was also designing clothes for herself and close friends. Poiret noticed her talent and encouraged her to pursue Fashion. Her family’s erudition had ignited Schiaparelli’s interest in ancient cultures at an early age and now formed her design aesthetic. She launched a collection of hand- knit sweaters with surrealist trompe l’oeil images, geometric designs and a pattern that gave the impression of a scarf wrapped around the wearer’s neck. The “pour le Sport” line soon expanded to include ski-wear and swimsuits with interior bra and low-cut back which she patented. The sportswear had such an impact that American textile manufacturers offered her licensing agreements.

From 1929, she introduced innovations in fabrics, cuts and detailing: the raincoat made with rubberised wool and silk, the wrap dress, the padded-shoulder suit, the famed surreal Dali lobster, the monkey fur, the crepe jumpsuit with huge pockets and visible zips as part of the design element, the braided satin cape, the cashmere belted coat-dress and the duchesse satin cocktail dress that was draped into a surreal bow at the back. and reversible evening dresses. In 1931, her divided skirt shocked the tennis world when worn by Lili de Alvarez at Wimbledon1931. One of her most notable designs is black wool outwear intricately hand embroidered with a golden palm tree that she developed in collaboration with Lesage; Marlene Dietrich ordered one and illustrator Francis Marshall sketched Schiaparelli wearing it. She is also credited with the development of revolutionary fabrics such as rhodophane and crushed rayon crepe. The business went from strength to strength and she acquired a salon she christened, Schiap Shop.

Post-war, The House of Schiaparelli struggled and she discontinued her couture business. Though held in high esteem, the maison has been slow to gain traction since it reopened in 2013.

Schiaparelli’s design repertoire included jewellery. During the Thirties, her jewellery design was produced by Schlumberger, Clemént and Jean-Pierre. One of her most Surrealist designs was a 1938 Rhodoid necklace with metallic insects by Clément, giving the illusion that bugs were crawling on the wearer’s skin. Schiaparelli also offered brooches by Alberto Giacometti and fur-lined metal cuffs by Méret Oppenheim.

Schiaparelli collaborated with a number of contemporary artists to develop designs. The designs in collaboration with Salvador Dalí are among her best known — The Lobster was a white silk evening gown with a handpainted lobster by Dalí; The Tears Dress was a blue evening gown printed with a Dalí design of trompe l’oeil rips and tears, worn with a veil; The Skeleton was a black crepe dress with trapunto quilting to create padded ribs, spine and legs; Shoe Hat, shaped like a woman’s high heeled shoe, had the toe tilted over the wearer’s forehead. In 1937, Schiaparelli collaborated with Jean Cocteau to create two art-themed designs intricately embroidered by Lesage.

Schiaparelli did a stint in costume designing, including Zsa Zsa Gabor’s looks for the 1952 biopic of Henri de Toulouse-Lautrec, Moulin Rouge. She also dressed Mae West for Every Day’s A Holiday, using a mannequin based on the actress’ measurements.

Schiaparelli’s perfumes were noted for their stylish packaging and bottles. Her most popular fragrance was “Shocking!”, in a bottle sculpted by Leonor Fini in the shape of a woman’s torso inspired by Mae West’s tailor’s dummy and Dalí paintings of flower-sellers. Other perfumes included Salut; Souci; Schiap; Sleeping; Snuff; Roi Soleil; and Zut!

1934: She was the first female fashion designer to be featured on the cover of Time.

1940: In Dallas, she was the first European to receive the Neiman Marcus award for services to fashion.