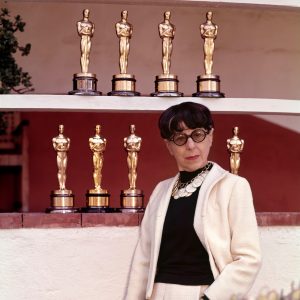 Edith Head was the daughter of a mining engineer, and she grew up in various towns and camps in Arizona, Nevada, and Mexico. She attended the University of California (B.A.) and Stanford University (M.A.). After a time as a schoolteacher and some additional study in Los Angeles at the Otis Institute and the Chouinard Art School, she was hired (1923) by the head designer at Paramount Studios. For several years she worked her way up from sketcher to costume designer by way of apprentice assignments and such minor but memorable accomplishments as designing actress Dorothy Lamour’s first sarong (The Jungle Princess, 1936).

In 1938 Head became chief designer at Paramount, in charge of a costume department with a staff of hundreds. She was the first woman to head a design department at a major studio. From then on, at Paramount and later at Universal Studios, she became America’s best-known and most successful Hollywood designer. She was noted for the range of her costume designs, from elegant simplicity to intricate flamboyance, and she also gained a reputation for being able to placate temperamental actors and directors.

In 1924, despite lacking art, design, and costume design experience, the 26-year-old Head was hired as a costume sketch artist at Paramount Pictures. Later she admitted to “borrowing” other students’ sketches for her job interview. She began designing costumes for silent films, commencing with The Wanderer in 1925 and, by the 1930s, had established herself as one of Hollywood’s leading costume designers. She worked at Paramount for 43 years until she went to Universal Pictures on March 27, 1967, possibly prompted by her extensive work for director Alfred Hitchcock, who had moved to Universal in 1960.

Head’s marriage to set designer Wiard Ihnen, on September 8, 1940, lasted until his death from prostate cancer in 1979. Over the course of her long career, she was nominated for 35 Academy Awards, annually from 1949 (the first year that the Oscar for Best Costume Design was awarded) through 1966, and won eight times – receiving more Oscars than any other woman.

Although Head was featured in studio publicity from the mid-1920s, she was originally overshadowed by Paramount’s lead designers, first Howard Greer, then Travis Banton. Head was instrumental in conspiring against  Banton, and after his resignation in 1938 she became a high-profile designer in her own right. Her association with the “sarong” dress designed for Dorothy Lamour in The Hurricane (1937) made her well known among the general public, although Head was a more restrained designer than either Banton or Adrian. She gained public attention for the top mink-lined gown she created for Ginger Rogers in Lady in the Dark (1944), which caused much comment owing to the mood of wartime austerity.The establishment, in 1949, of the Academy Award for Costume Design further boosted her career, giving her a record-breaking run of Award nominations and wins, beginning with her nomination for The Emperor Waltz. Head and other film designers like Adrian became well known to the public.

On February 3, 1955 (Season 5 Episode 21), Edith Head appeared as a contestant on the Groucho Marx quiz show You Bet Your Life. She and her partner won a total of $1,540. Her winnings were donated to charity.

Head also authored two books, The Dress Doctor (1959) and How To Dress For Success (1967), describing her career and design philosophy. These books have been re-edited in 2008 and 2011 respectively.