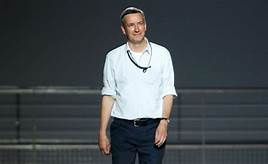 Dries Van Noten, baron Van Noten by Royal order of king Philippe I, is one of the most successful members of the renowned Antwerp Six,  is a Belgian fashion designer. He has an eponymous fashion brand, which he co-founded with CEO and business partner Christine Mathys.

Born on 12th May 1958 in Antwerp,Van Noten is the third generation of his family to work within fashion; both his father and grandfather were tailors. In 1970 his father opened a boutique on the outskirts of Antwerp selling Emmanuel Ungaro, Salvatore Ferragamo and Ermenegildo Zegna. His father’s business took Van Noten to the menswear shows in Milan, Düsseldorf, and Paris, experiences that taught him both the commercial and technical sides of the industry, and prompted his realisation that he was much more interested in design.

At the age of 18, Dries entered the fashion design course of Antwerp’s Royal Academy. On graduating in 1980, he began to freelance as a consultant designer before starting his own collection of menswear in 1986.

Van Noten freelanced for a variety of local designers before launching a menswear line in 1986.That led to a small order from Barneys New York. Since then, “The New York Times” described him as “one of fashion’s most cerebral designers”in 2005. Currently, Dries Van Noten  presents collections for women and men for Spring/Summer and Autumn/Winter each year.

Van Noten dressed actress Cate Blanchett for the 2008 Academy Awards, and has continued to dress her for other red carpet events till now. Throughout his career Dries Van Noten has on occasion dressed the Queen of the Belgians for state visits and designed for various contemporary dance companies including Anne Teresa de Keersmaeker and Justin Peck at the New York City Ballet as well as collaborating with artist David Michalek on his performance at the Brooklyn Academy of Music.In 2018, the third episode of television show Killing Eve notably featured one of his items, known eponymously as the Dries van Noten suit.

In 2004, he celebrated his 50th fashion show with a dinner for 500 guests seated at a table that later became the catwalk for the women presenting the collection. 2017 brought on the 100th Dries Van Noten fashion show.

Van Noten and his partner Patrick Vangheluwe work and live in Antwerp, in a house situated outside of the city.

In 1986, he presented his first menswear collection in London as part of The Antwerp Six collective.Immediately, orders were  placed by prestigious customers like Barneys New York, Pauw in Amsterdam and Whistles in London. Louis, Boston, was one of the first to bring Dries Van Noten to USA, and selling it in Boston.In September of the same year Dries opened a tiny eponymous boutique in Antwerp’s gallery arcade only to move in 1989 to ‘Het Modepalais’ a five storey former department store in the Nationalestraat which remains today.

In 2007, Dries Van Noten opened his Paris boutique for women,decorated with antiques collected by Van Noten and his partner Patrick Vangheluwe.In 2009, a shop for both collections in Tokyo’ Aoyama district and in partnership with Tomorrowland was opened .He also debuted a shop for his collection for men in Paris that year.

Van Noten’s brand has shops in multiple locations worldwide.Van Noten has six stand alone stores, including a five-storey former department store in Antwerp. The brand is said to be carried in some 400 fashion shops around the world. The scale of his business is particularly impressive given that the designer does not advertise it, although it claims to have annual sales of some 30 million euro.In 2018, it was acquired by family-owned Spanish fragrance and fashion firm Puig; van Noten himself remains a minority shareholder.

In 2014, the Parisian Musée des Arts Décoratifs staged the exhibition featuring Van Noten’s designs, which later traveled to Antwerp in 2015. The show also included 100  paintings, garments and clips from outside collections.

2008 : Van Noten won the CFDA International Designer of the Year Award and the distinction of “Royal Designer for Industry” by the London-based RSA Trustee Board.

2016: Van Noten won the Culture Award of the Province of Antwerp for his cultural contribution, dressing the Belgian Queen, various actors for awards and renowned contemporary as well as classical dancers for performances.