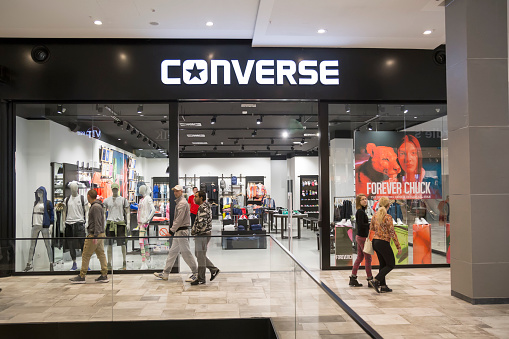 Acclaimed for for its resistant lightweight materials, Converse was popular in top-level sport as well as on the battlefield and has been dominant in pop culture over several decades.

It all began with a fall down the stairs. The injured man, Marquis Mills Converse, who was manager at a footwear manufacturing firm, came up with the concept of creating shoes with rubber soles so that this incident wouldn’t reoccur. In 1908, he founded Converse Rubber Shoe Company, which at that time sold boots with rubber soles.

By 1915 the company was manufacturing athletic shoes and in two years introduced Converse All-Star basketball shoe. In 1923, basketball player Chuck Taylor walked into the store complaining of sore feet. Within a year, the company remodelled a pair of shoes with more support and flexibility; the world’s first performance shoes for basketball was named “Chuck Taylor All Stars”. In a marketing move that would prove to be iconic, Converse hired him as brand ambassador. Taylor organised basketball clinics across the US to promote the brand and in 1936, Chuck Taylor All Star was official shoe of Team USA at the first-ever basketball championship at Summer Olympic Games held in Berlin. When the United States entered World War II in 1941, Converse began production of rubberised footwear, outerwear and protective suits for the military. During this time, Chuck Taylor served as physical fitness instructor for the military before resuming his career as a salesman.

At its peak, the brand reportedly had eighty per cent market share of the sneaker segment in the US. In the Seventies, Converse acquired its competitor, PF Flyers. In 1975 the brands split due to an anti-trust lawsuit but Converse kept the trademark rights of the Jack Purcell line it had purchased from the PF Flyers acquisition and it is produced and sold till date. Despite its heritage as the chart-topping basketball shoe, a change of fortune was in store. The brand lost its strength with the passing of Chuck Taylor in 1968 a year after he was inducted into the Basketball Hall of Fame. By the late Seventies, high-tech performance trainers from rival brands Nike, Adidas and Puma entered the market and Converse lost its monopoly. When Reebok introduced new designs and technology in performance shoes Converse was no longer official shoe of the National Basketball Association. The brand’s brief revival in the Eighties and Nineties, with Kurt Cobain as its poster boy, marked a shift in brand image. With affordability and stellar design as its strength, Converse sneakers was carving a niche in the casual footwear segment after legendary actor James Dean wore Jack Purcell Converse shoes in the Fifties.

However, debt piled up and the company filed for bankruptcy on January 22, 2001 and its last manufacturing plants in the U.S. shut. In April 2001, Footwear Acquisitions, led by Marsden Cason and Bill Simon, purchased the company and turned it around. In July 2003, Nike acquired Converse for reportedly $309 million. The brand image underwent another transformation as Nike steered Converse away from its performance shoes towards prolific collaborations with fashion brands Givenchy, Missoni and Maison Martin Margiela. Recent artistic alliances include a limited edition capsule of Chuck Taylor All Stars inspired by Nate Lowman’s slashed canvases, with each pair selling for $25,000. The formula worked — Converse raked in reported $1.4bn in 2012. With President and CEO Scott Uzzell at the helm, however the brand has begun a significant re-entry in basketball. Kelly Oubre Jr. was the first player to try out a pair of shoes that combined Converse’s traditional silhouette with Nike’s modern technology. In 2020, the brand inked deals with Draymond Green, Natasha Cloud and Shai Gilgeous-Alexander.

Empowering today’s daring spirit of youth by celebrating freedom of expression through individuals and their movement.

Committed to employing a diverse workforce, and working with and providing reasonable accommodation to individuals with disabilities.