Collette Dinnigan is an Australian based fashion designer 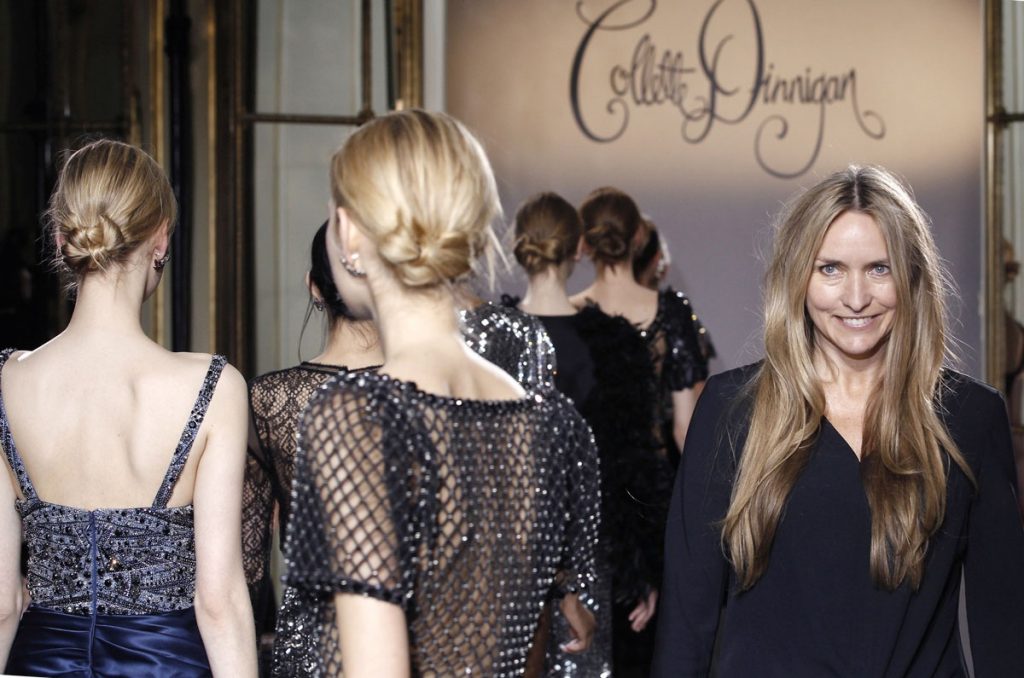 Collette Dinnigan created a fashion empire from scratch in the early 1990s, and by 1995 had become the first Australian designer to launch and show a ready-to-wear collection in Paris.

Since closing her clothing label in 2013, the Australian designer has focused on styling luxury homes – the latest, a 500-year-old farmhouse in Puglia.

Collette Dinnigan was born in South Africa in 1965. When she was eight, her family lived on their yacht for a number of years, eventually sailed around the southern coast of Australia and on to New Zealand, where she was raised. She studied at Wellington Polytechnic, and on graduation moved to Australia.

She began her career in fashion by working for the Costume Department of the Australian Broadcasting Commission in Sydney.

She opened her own range in 1990, with the launch of a dry-clean only lingerie collection. Her first collections were purchased by Barney’s, Neiman Marcus,Harvey Nichols and Joyce, which established an international presence.She was also the first Australian to launch a ready-to-wear collection, in Paris in 1995.

Her label drew inspiration from classical vintage styles; which spoke of luxury and were distinctly feminine. Collette Dinnigan described her label’s style as being romantic bohemian and timelessly elegant, based on the reworking of historical fabrics. Collette’s bridal wear became so famous,it was featured in Vogue Magazine. Her evening wear was also quite popular in Australia.While fashion designing was a big part in her life, Collette started designing for all ages, infants to bridal wear.

She  had an “on-again, off-again” relationship with Richard Wilkins, with whom she had a child,Estella in 2004. Dinnigan later had a son, Hunter, with husband, hotelier Bradley Cocks.

In 2001, Dinnigan opened her first store on Greg Street in Sydney’s Paddington, and imported stuff to her fashions to Barneys New York, Harvey Nichols in London, and Hong Kong.In 1995, Dinnigan was the first Australian to launch a ready-to-wear collection in Paris; she was also the first to be asked to be in the ‘ready-to-wear parade’ in Paris.

In 2004, the Collette Dinnigan Enfant Collection was launched, inspired by the birth of her daughter, Estella. Later, in 2007, Collette Dinnigan Bridal was introduced to the world.Target Australia collaborated with Collette to create an affordable lingerie brand in 2008.

To mark 20 years in business, collette by Collette Dinnigan was launched in 2010, a diffusion collection. David Jones became the main stockist rolling the label out into 34 stores and building 7 flagship concept stores.

At the end of 2013 Dinnigan significantly scaled down her business, closing her boutiques in Sydney, Melbourne and London and stopping production of her bridal and evening wear lines. Dinnigan emphasised that the business was still profitable and had no debt; she just  wanted to spend more time with her family.

On 30th of March 2016, a section of Collette’s exhibition Collette Dinnigan: Unlaced opened in the Indooroopilly Shopping Centre in Brisbane.The Victoria & Albert Museum in London features a Collette Dinnigan lingerie set in their exhibition Undressed: A Brief History of Underwear, open from 16 April 2016 until 12 March 2017.In May 2016, Golf House, Sydney’s newest residential development, announced its interiors will be designed by Collette Dinnigan.Later in June , Collette Dinnigan teamed up with Porter’s Paints to create a range of decorative handcrafted wallpapers inspired by her global travels.

On October 4, 2016 Collette Dinnigan announced a second and final limited edition collaboration with Aldi, Young Hearts, introducing boys wear.On December 6, 2016 Linen House announced it will launch a new collection with Collette Dinnigan. This was Collette’s first linen collection and reflected her passion for antique textiles and was inspired by her travels.

1995: Collette Dinnigan became the first and is the only Australian designer to have been invited by the Chambre Syndicale du Pret a Porter des Couturiers et des Createurs de Mode to show on the prestigious Paris schedule.

1996: Collette Dinnigan was named as Designer of the Year by a prestigious panel of industry experts at the Australian Fashion Awards. She also received Innovator of the Year.

1997 :In recognition of Collette Dinnigan’s outstanding contribution to Australian business she is presented with the Louis Vuitton Business Award.

1998:Collette Dinnigan receives the Award For Excellence from Fashion Group International of Melbourne and is inducted into their Business Women’s Hall of Fame.

1999: She was awarded Avon Woman’s Day Spirit of Achievement 1999 – for recognition of outstanding achievements, leadership and vision in the field of Fashion & Beauty.

2000: She was awarded  Australia’s 50 Most Beautiful Exports 2000 – To recognise outstanding achievement by an Australian overseas and helping Australia’s export effort.

2002: Collette Dinnigan was honoured with a Leading Women Entrepreneurs of the World Award. She joined other honorees including Donna Karan, Anita Roddick and Jenny Craig.

2004: Collette Dinnigan was presented with the Cleo and Maybelline Best Celebrity Designer of the Year Award; she was also recognised for her contribution to the industry and outstanding achievement with a Hall of Fame Award, voted by a panel of her peers.

2005: As part of the Australian Legends series, Australia Post issues a stamp featuring Collette Dinnigan.Readers of Marie Claire voted for her Best Australian Designer and she was awarded the prestigious Outstanding Achievement in Fashion Award by them.She was also awarded: Australia’s 50 Most Beautiful Exports 2005.

2006: She was awarded: Australia’s 50 Most Beautiful Exports 2006 and ‘Recognising our global achievers’ – for outstanding achievement in global: markets and to recognise your contribution to the well being of Australia’s economic future through overseas trade.

2011: Collette Dinnigan was inducted into the Creative Arts Hall of Fame, Massey University, New Zealand recognised for her contribution to the global fashion design world.

Collette was one of five Australian’s invited to meet Queen Elizabeth at Buckingham Palace.

June 2017: Collette was awarded the Officer of the Order of Australia (AO) under the general division within the Australian honours system.

November 2017: Collette was inducted into the Design Institute of Australia (DIA) Hall of Fame which celebrates the work of eminent designers and their significant contribution to Australia’s economic development and cultural identity.