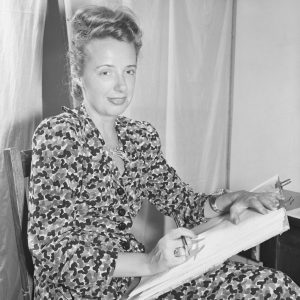 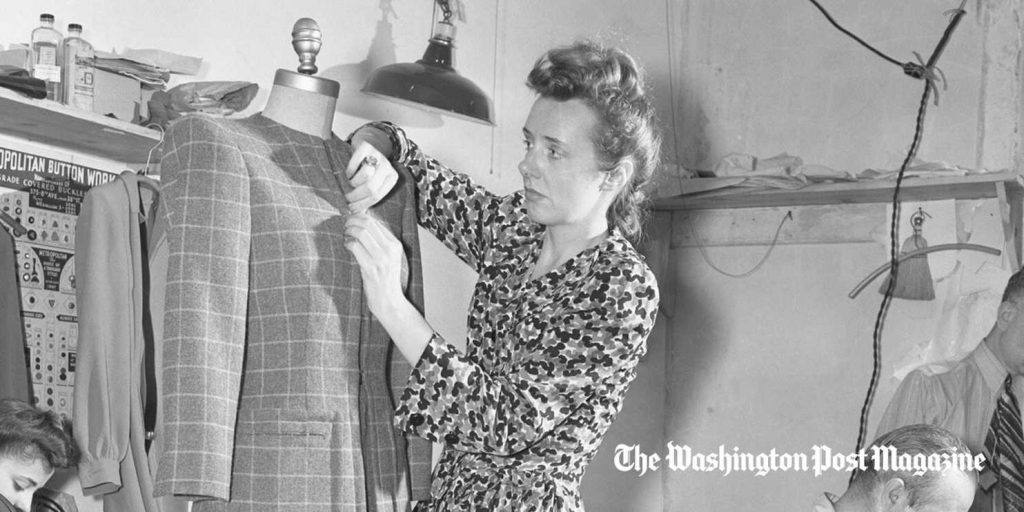 Claire McCardell was the founder of American ready-to-wear fashion, and in doing so defined what has become known as the American Look. She created casual but sophisticated clothes with a functional design, which reflected the lifestyles of American women.She is credited with the creation of American sportswear.Fashion designers such as Isaac Mizrahi, Donna Karan, Calvin Klein, Norma Kamali, and Cynthia Rowley all have been influenced by McCardell. Anna Sui’s line of spring-summer 1999 was directly inspired by her work.

Claire McCardell was born on May 24, 1905  in Frederick, Maryland. McCardell was the eldest of four children born to Eleanor and Adrian McCardell, a Maryland state senator and president of the Frederick County National Bank. As a child, McCardell earned the nickname “Kick” for her ability to keep the boys from pushing her around.

Fascinated by fashion from a young age, McCardell wanted to move to New York City to study fashion design at age 16.  But McCardell’s father convinced her to enroll in the home economics program at Hood College instead. In 1926 Claire McCardell enrolled at Parsons School of Design in New York. As part of her course, she studied in Paris for a year before graduating in 1928.In Paris, McCardell and her classmates were able to purchases samples by couturiers such as Madeleine Vionnet that they took apart in order to study their structure.

After graduation, she worked odd jobs sketching at a fashionable dress shop,painting flowers on paper lamp shades, and acting as a fit model for B. Altman.McCardell secured an assistant’s position to Robert Turk, an independent designer. When Turk was appointed as a designer at Townley Frocks in 1931, McCardell went with him.

McCardell was known for many other innovations and she experimented with unconventional fabrics for various silhouettes. Her wool jersey bathing suits and cotton-diaper swimsuit are examples of nontraditional fabric use. Madras cotton halter-style full-length hostess gowns were shown for evening. Her design trademarks were double top-stitching, brass hardware replacing buttons with decorative hooks, spaghetti ties, large patch pockets, and Empire waists. McCardell also brought denim to the fashion forefront as a dress fabric, as well as mattress ticking, calicos, and wool fleece. Manmade fibers, too, were a source of innovation. She also loved leotards, hoods, pedal pushers, and dirndl skirts. Surprising color combinations were indicative of McCardell’s work.

Claire McCardell is credited with creating the casual American style of dressing. She ignored Parisian couture and after 1940 McCardell refused to even visit the Paris collections for fear of them influencing her designs. Inspired by a love of sport and believing that clothes should be utilitarian, McCardell produced comfort first, casual apparel. Her designs understood the female body and revolutionised casual wear.

Claire McCardell’s greatest contribution to fashion history was in creating and defining the American Look. Her inspiration is evident in the work of the many fashion designers who followed her.

In 1943, McCardell married the Texas-born architect, Irving Drought Harris, who had two children by an earlier marriage, and established a home base in Manhattan.

McCardell’s life and work were cut short by a diagnosis of terminal colon cancer in 1957.McCardell died on March 22, 1958 at the age of 52. After her death, McCardell’s family decided to close the label.

Late in 1930, McCardell began working as an assistant designer for Robert Turk.Soon afterward, Turk moved to a larger company, Townley Frocks, and brought McCardell with him. In 1932, Turk died in a boating accident leaving McCardell to finish the autumn/winter collection. The line was successful and McCardell was promoted to designer at Townley. She began to create her revolutionary ‘American Look’. Advocating a youthful and fresh style of dressing, McCardell began to make easy to wear, simple clothes. McCardell designed simple, inexpensive clothes under the label Townley Frocks by Claire McCardell.

During the 1930s, she began to show innovations such as sashes, spaghetti string ties, and the use of menswear details that would become part of her design signature. In 1934 McCardell designed a collection of separates featuring five interchangeable pieces, an idea decades ahead of its time. Two years later she created spaghetti string ties on dresses. This was followed by McCardell designing Townley’s first bathing suit in 1937.

In 1938, she modernized the dirndl.She also pioneered matching separates.In 1938, Claire McCardell introduced the Monastic Dress, a bias-cut tentlike dress. It had no seamed waist and hung loosely, but with a versatile belt it could be adapted to hug a woman’s curves gracefully. Best & Co. exclusively sold the dress for $29.95 and it sold out in a day.The “Monastic Dress” was widely copied and the cost of trying to stop knock-offs drove Townley Frocks out of business.That same year, Townley Frocks closed resulting in McCardell going to work for Hattie Carnegie.

While working for Hattie Carnegie, McCardell met Diana Vreeland (then at Harper’s Bazaar). She would become McCardell’s lifelong friend and champion.\In 1940, just before leaving Carnegie, McCardell attended her last Parisian fashion show, preferring from then on to avoid any French influence on her clothing.That year, McCardell won First Prize at the New York World’s Fair for costume design.

McCardell left Carnegie in 1940 and joined Win-Sum for several months before returning to Townley Frocks, which had been reopened as Adolph Klein.The company’s labels then read, “Claire McCardell Clothes by Townley”, making her one of the first American designers to have name recognition.In 1941, McCardell produced a line of separates that made nine outfits from five pieces. The pieces included a taffeta skirt, a jersey top, and a jersey jacket.That same year, she showed her first “Kitchen Dinner Dress”. Made of cotton, the “Kitchen Dinner Dress” had a full skirt with an attached apron.

In 1942, McCardell created her famed “Popover Dress”. It was a response to a Harper’s Bazaar challenge to create something fashionable one could wear to clean the house and then, wear to a cocktail party. The simple grey dress came with a matching potholder that fit into the dress pocket.The “Popover Dress” sold for $6.95 and more than 75,000 were sold in the first season alone.These dresses became a staple of McCardell collections and over time, she made versions in different lengths and fabrics.The “Popover Dress” received a citation from the American Fashion Critics Association and in 1943, McCardell won a Coty Award.

The following year the Diaper bathing suit was created.McCardell commissioned Capezio to produce a range of ballet flats to match her designs. When the government announced a surplus of weather balloon cotton materials in 1944, McCardell quickly bought them up, using them to design clothes that patriotic American women wore with pride. Calico beach kilts were designed in 1945. The barrel bathing suit was designed the following year, the pleated dress in 1948 and the bandana neckline in 1949.

Beginning in 1945, McCardell was featured as an “American Look” designer by Lord & Taylor’s department store.In 1946, McCardell won the Best Sportswear Designer Award and in 1948 she won the Neiman-Marcus Award.After the war, McCardell worked as a volunteer critic in the fashion design department at Parsons.In 1950, President Harry S. Truman, Bess Truman, and Margaret Truman presented McCardell with a Woman of the Year Award from the Women’s National Press Club.This was the award McCardell cherished most.

In 1952 McCardell became a partner in Townley. The following year she featured in a twenty year retrospective at the Frank Perls Gallery in Beverly Hills.The exhibit included the “Monastic Dress”, the “Diaper Bathing Suit”, Capezio ballet flats, and work-wear inspired pieces with rivets. In 1954, she worked on an advisory panel formed by Time Inc. to create a new magazine that would become Sports Illustrated.McCardell was featured in Life magazine in 1955. Her designs were seen in fabrics by Picasso, Chagall, Miro and Duffy. That same year she was the third fashion designer to be featured on the cover of Time Magazine.McCardell published a book entitled What Shall I Wear? The What, Where, When, and How Much of Fashion in 1957.