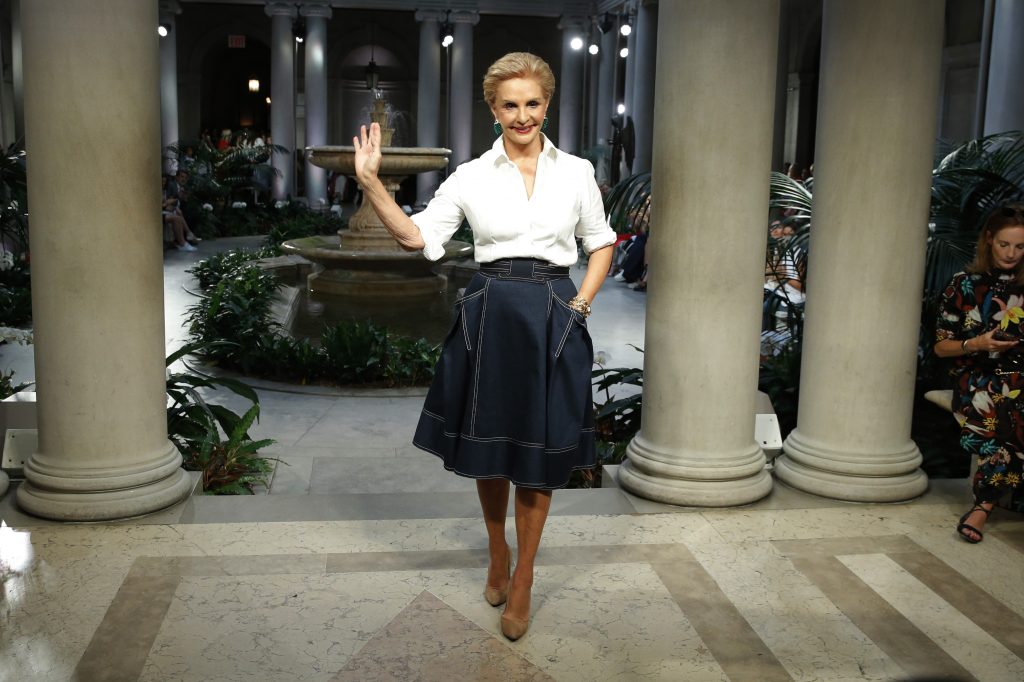 Carolina Herrera is a Venezuelan-American fashion designer. She is known for her elegance and class in dressing celebrities around the world. She comes from a wealthy family and has a privileged background. Her mother instilled in her passion and discipline that helped her transform into an elegant woman. In the seventies and eighties, she was quite well known in Venezuela because of the fact that she was considered to be the one of the best-dressed designers in the country. Later, she moved to New York City where she decided to become a fashion designer. Even, she hadn’t proper training in fashion designing, soon she became very successful at it and was dressing some of the most famous and influential women in the world which led to a huge boom in the popularity of her clothes. She dressed. She has been dressing various first ladies including Jacqueline Onassis, Laura Bush,and Michelle Obama. The world acknowledges her skills in fashion designing as she won the number of awards in the various fields. She believes that Queen Elizabeth is the fashion icon of the century.

Herrera was born in Caracas, Venezuela on 8th January 1939. Her father Guillermo was the former governor of Caracas. Her grandmother introduced her to the work of fashion, she took her to Paris to go to the Balenciaga couture show when she was just 13 years old.

Herrera began her career working as a publicist for Emilio Pucci, who is an Italian fashion designer and politician. Then she started working at Pucci’s Caracas boutique and moved to New York City in 1980. Because of her dramatic style, she became well known.

She first appeared on the International Best Dressed List in 1972, and then was elected to its Hall of Fame in 1980. She wanted to start a fabric design business, but she started a clothing line instead because her friend Diana Vreeland, who was the editor in chief of Vogue, suggested that she do so. Puig, a Spanish fragrance company licensed the Carolina Herrera to develop and market a line of perfumes in the late 1980s. The firm gives the Carolina Herrera fashion business in 1995, retaining her as Creative Director. In 2008, they launched a company named ready-to-wear which is also famous as CH Carolina Herrera. As of 2012,there were 18 Carolina Herrera and CH boutiques in the world, which is approximately 280 stores in 104 countries. Her daughter Carolina Jr. and Patricia Lansing participated in the creative direction and design in 2011. The first advert for the brand was released in 2015, featuring models Elisabeth Erm and Josephine Le Tutour. Carolina Herrera launched new women’s fragrance in 2016 which were available for purchase from September, the name of the fragrance is ‘Good Girl’ and famous model Karlie Kloss was the face of the fragrance.

Herrera was awarded the Geoffrey BeeneLifetime Achievement Award from the Council of fashion Designer of America in 2008. While in 2004 she was awarded the award “Womenswear designer of the Year” in 2004. She is also awarded Spain’s Gold Medal for Merit in the Fine Arts which was presented to her in 2002 bu Lomg Kiam Carlos I, who is a member of the Spanish royal family. She is also the recipient of the International Center in New York’s Award of Excellence. In 1997, she was awarded the Gold Medal of the Queen Sofia Spanish Institute. She received the Fashion Group International Superstar Award, the Mercedes-Benz Presents” title in 2011 and the style awards designer of the year in 2012. She has been on the cover of Vogue seven times also. In 2014, she earned the 2014 Couture Council Award for Artistry of Fashion.

She married a Venezuelan landowner named Guillermo Behrens Tello in 1957 at the age of 18. She got divorced in 1964. She became a mother of his two daughters named Mercedes Behrens-Pacanins and Ana Luisa Behrens-Pacanins. She again married Reinaldo Herrera Guevara in 1968. Her second husband had the title The 5th Marquis of Torre Casa in 1962 upon his father’s death. Reinaldo was the host by profession and he hosted the morning shows program on Venezuelan Television. The elder son of Don Reinaldo Herrera Uslar, 4th Marquis of Torre Casa, a prominent Venezuelan sugarcane plantation owner, aristocrat and art collector. By marriage, Carolina held the title The Marquise consort of Torre Casa, until it was retracted in 1992, as Reinaldo has produced no son.