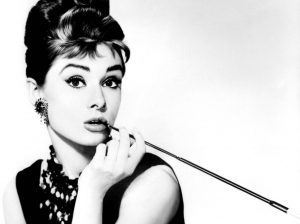 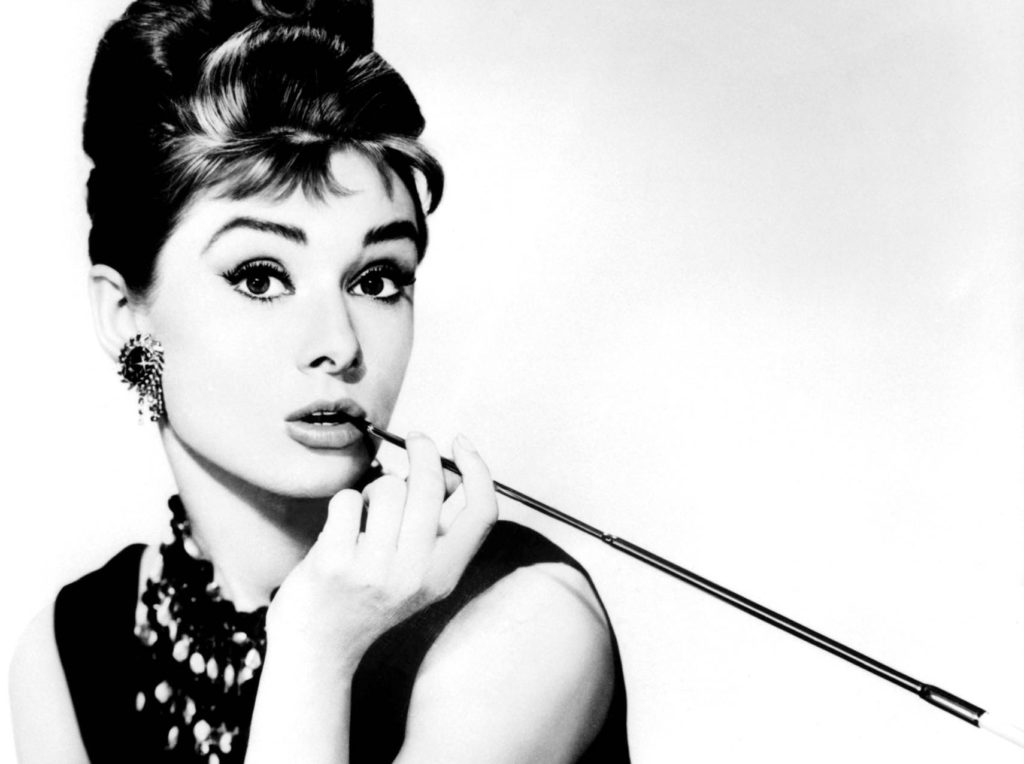 British actress and humanitarian Audrey Hepburn [1929–1993] became a cult figure as Holly Golightly in “Breakfast at Tiffany’s.” Her little black dress, designed by Givenchy, is a wardrobe staple even today. Following a string of legendary films co-starring A-list actors Fred Astaire, Humphrey Bogart, Gary Cooper, Sean Connery, Cary Grant and Gregory Peck, she bagged Academy, BAFTA, Emmy and Tony Awards and was hailed by American Film Institute as the third-greatest female screen legend in Golden Age Hollywood. Hepburn’s most notable achievements, however, were as a humanitarian. As UNICEF Goodwill Ambassador, she received The Presidential Medal of Freedom for her efforts with impoverished children and communities in Asia, Africa and South America. She was the real deal.

Born in Ixelles, Audrey Kathleen Ruston was raised in Belgium, England and the Netherlands. Her parents separated when she was six and she lived with her mother in London. Hepburn attended a boarding school in England and later, moved to The Netherlands with her mother during World War II, where she attended Institute Arnhem Conservatory. Since her father had always wanted her to be educated in England, Hepburn moved to Kent in 1937. That year her parents filed for a divorce. In the Sixties, Hepburn renewed contact with her father after locating him through the Red Cross, and financially supported him until his death.

Hepburn’s youth was tumultuous. Reportedly, she was a resistance spy against the Nazis during World War II. When Great Britain declared war on Germany in 1939, her mother, now divorced, moved with her to The Netherlands believing they would be safe from the war there. They settled in Velp near Arnhem, unaware that this would be the site of one of the major battles of the war. After the Germans invaded The Netherlands in 1940, Hepburn assumed the name Edda van Heemstra. In 1942, the Nazis assassinated her uncle, Otto van Limburg Stirum, in retaliation for an act of sabotage by the resistance movement. Her half-brother Ian was deported to Berlin to work in a labour camp and her second half-brother went into hiding to avoid that fate. This only strengthened the Dutch resolve and was a turning point for Audrey Hepburn. In September 1944, Allied forces launched Operation Market Garden in an attempt to capture bridges and create a northern pathway into Europe. Thousands of British paratroopers landed behind enemy lines near Arnhem but encountered more German resistance than anticipated, and the mission was a failure. Arnhem and Velp sustained severe damage. Though the battle was over in a few days, there was aerial warfare, causing death and destruction for months. Food and supplies were diverted to the Nazis, leading to The Hunger Winter. Hepburn lived in the cellar of the family apartment to avoid bombings and faced severe malnutrition; her family resorted to making flour out of tulip bulbs to bake cakes and biscuits to sustain themselves. She then met Dr. Hendrik Visser’t Hooft and became a Dutch Resistance volunteer, performing clandestine gigs to raise funds. Reportedly, several children were couriers as they were unlikely to raise the suspicions of German troops, and Hepburn was believed to be one of them, delivering messages and papers to Resistance members. Her ability to speak English made her an invaluable asset. After the war ended, Hepburn moved with her mother and siblings to Amsterdam.

Hepburn made her film debut as an air stewardess in ‘Dutch In Seven Lessons’. Later that year, she moved to London after accepting a scholarship with Ballet Rambert and supported herself with part-time modelling and theatre. Spotted by a casting director in one of her performances, she registered as a freelance actress with Associated British Picture Corporation and soon appeared in minor roles in films like ‘One Wild Oat’, ‘Laughter In Paradise’, ‘Young Wives’ Tale’, ‘The Lavender Hill Mob’ and ‘Monte Carlo Baby’. French novelist Colette was coincidentally in Monte Carlo during the filming of ‘Monte Carlo Baby’ and cast her in Broadway play ‘Gigi’ — the turning point in her career.

Hepburn rose to stardom with ‘Roman Holiday‘ co-starring Gregory Peck, for which she won Academy Award For Best Actress, Golden Globe Award For Best Actress — Motion Picture Drama and BAFTA Award For Best British Actress In A Leading Role. A feat unheard of for a first-time lead! That year, she also won Tony Award for Best Lead Actress In A Play for her performance in ‘Ondine’ and starred in a number of hit films — ‘Wait Until Dark‘; ‘Sabrina‘ co-starring Humphrey Bogart; ‘Funny Face’ co-starring Fred Astaire, ‘Green Mansions‘; ‘The Unforgiven’ co-starring Burt Lancaster; ‘Love In The Afternoon’ co-starring Gary Cooper; ‘Two For The Road‘; ‘The Nun’s Story‘ for which she won BAFTA; iconic film ‘Breakfast At Tiffany’s‘ where the Givenchy dress she wears is considered the most famous “little black dress” even today; ‘Charade‘ co-starring Cary Grant; ‘How To Steal A Million’; co-starring Peter O’Toole, Eli Wallach and Hugh Griffith; ‘War And Peace‘ co-starring Henry Fonda and Mel Ferrer; and ‘My Fair Lady‘ which won Academy Award and BAFTA for Best Picture. After that she occasionally appeared in films, attempting a comeback with ‘Robin And Marian‘ co-starring Sean Connery as Robin Hood and ‘Bloodline‘ based on Sidney Sheldon’s book. Hepburn’s last film ‘They All Laughed’ was unfortunately overshadowed by the murder of actor Dorothy Stratten.

In recognition of her career, she received BAFTA Lifetime Achievement Award, Golden Globe Cecil B. DeMille Award, Screen Actors Guild Life Achievement Award and Special Tony Award. She has been honoured on United States postage stamps and has a star on the Hollywood Walk of Fame.

After becoming UNICEF Goodwill Ambassador in 1989, Hepburn went on a field mission to Ethiopia where drought and civil strife had caused famine. In the following years, she made a series of field trips including a polio vaccine project in Turkey; training programmes for women in Venezuela; projects for children living and working on the streets in Ecuador; projects to provide drinking water in Guatemala and Honduras; and literacy projects in El Salvador. She visited schools in Bangladesh, undertook projects for impoverished children in Thailand, and nutrition projects in Viet Nam. She also visited Sudan as part of “Operation Lifeline”. Due to the civil war, food from aid agencies had been cut off and the mission was to ferry food to southern Sudan. In recognition of her work with UNICEF, United States President George Bush presented Audrey Hepburn with The Presidential Medal of Freedom while Academy of Motion Picture Arts and Sciences posthumously awarded her Jean Hersholt Humanitarian Award for her contribution to humanitarian causes. In 2002, UNICEF honoured Hepburn’s humanitarian work by unveiling her statue, “The Spirit of Audrey”, at its headquarters in New York.

In 1954, Hepburn married actor Mel Ferrer. She had two miscarriages and when she was pregnant for the third time, she took a year off work to prevent another miscarriage. Sean Hepburn Ferrer was born in 1960. Sadly the marriage didn’t last. Hepburn met her second husband, psychiatrist Andrea Dotti, on a Mediterranean cruise in 1968. They got married in1969, and their son Luca Andrea Dotti, was born the following year. Her husband was unfaithful and she too had an affair with Ben Gazzara during the filming of Bloodline. Their marriage lasted thirteen years and was dissolved in 1982. Until her death, Hepburn was in a relationship with actor Robert Wolders. In 1989, she recalled the nine years spent with him the happiest years of her life.

When Audrey Hepburn rose to stardom in Roman Holiday, her short hair, thick eyebrows and slim silhouette was a rage. Added to The International Best Dressed List in 1961, she was a muse to designers Hubert de Givenchy, Christian Dior and Cecil Beaton and was synonymous with minimalistic style. Her friendship with Hubert de Givenchy resulted in some of the most memorable film and fashion moments in the post-war era. Their collaboration was not limited to films. In 1969, she wed Andrea Dotti in a pink jersey mini designed by him and became the face of Givenchy’s perfume, L’Interdit. Hepburn was also credited with boosting the sales of Burberry trench coats when she wore one in Breakfast At Tiffany’s. Her influence as a style icon continues decades later, with her costumes fetching astronomical money — the “little black dresses” designed by Givenchy for Breakfast At Tiffany’s was auctioned by Christie’s for £467,200 !!

1954: Tony Award for Best Performance By A Leading Actress In A Play, in Ondine

1960: BAFTA Award for Best British Actress, in The Nun’s Story